Having never done the Mt Difficulty Marathon Ascent before, I didn’t really know what to expect. The name wasn’t very subtle and this initially caught my attention. The event was also in Central Otago at the beginning of June so there was a good chance we would be at the mercy of the elements. The flight into Queenstown provided a preview of what lay ahead as the mountains had a fresh dusting of snow. We arrived in Cromwell by mid afternoon and made our way to the pre-race briefing at the Mt Difficulty winery later that night. What followed was one of the more interesting pre-race briefings I have ever attended. The race organiser gave a very graphic description of what lay ahead. A cold start, chilling winds, ‘plants that were out to get you’, lots of gnarly climbs, rock scrambling, vertical ascents, and a whole range of human emotions including ‘hate’ from 30km onwards. I had never been to a race briefing before where there had been so many frequent threats of falling to your death. Essentially we were told that this was all about survival and that “suffering was the prize and that everybody was the winner”. I sensed the event would live up to its name and I had a slightly uneasy sleep that night. Race morning was cold as forecast. We arrived at the winery just after 7.30am and it was still dark. We were welcomed by a howling wind which swept through the vineyards and almost through the multiple layers of clothing I was wearing. There was a lot of movement at the start line as everybody was jostling about to keep warm. I knew this was going to be a tough day out. However, nothing started, nothing experienced. To an old fashioned “3, 2, 1, Go!” we headed out towards the mountains. 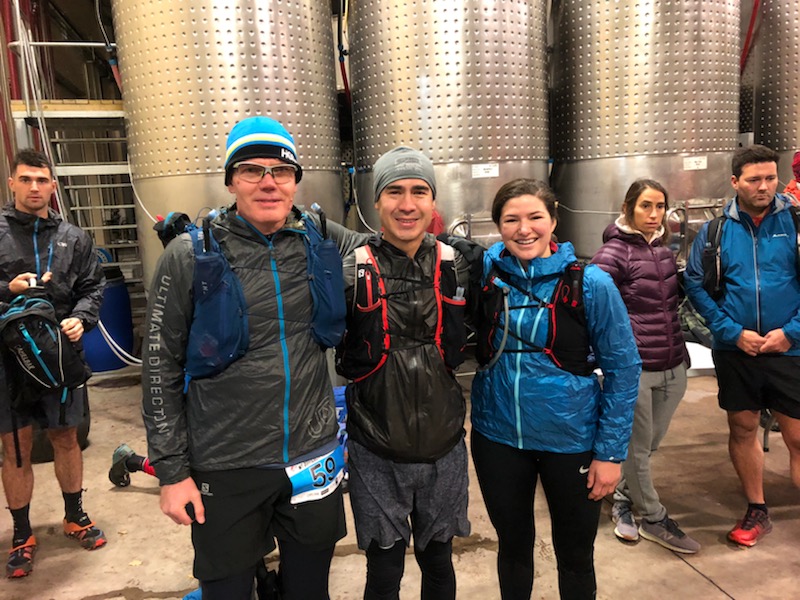 It was quite a gentle start along the roads and vineyards. There was also a beautiful smell of thyme in the fresh mountain air. The ascent up Nipple Hill got the heart rate and legs going and we were rewarded with a spectacular Central Otago sunrise and alpine views. The introduction to the ‘gnarly’ was in the form of a technical descent down Nipple Hill surrounded by perilous drops. Wisely, I packed my trekking poles in a bid to shift the odds further away from death. The next major ascent up a ridge was an appetiser of the difficulty to come. This was where the trail stopped and the orange tape started. A slow ‘straight up’ along any sheep or goat track you could find. This was followed by a pleasant short runnable section along a river. The next downhill cliff section was when things started to get a bit serious and a tad crazy. The gradient was so steep that a rope had to be installed in order to meet legal requirements. I attempted to negotiate the cliff with my trusty trekking poles instead of using the rope. However, this proved to be ill advised as I slipped on loose gravel and came crashing down to earth with a ‘snap’. Luckily I managed to avoid careening down the cliff face and thankfully the ‘snap’ was only the sound of a trekking pole breaking rather than my femur or tibia. Blood drawn, I paused, put away my defunct trekking poles and attempted to refocus. I descended using the recommend bum sliding technique utilising five points of contact. The scary thing was that the race briefing said that this section was only the warm up. I reached the aid station at the bottom of the cliff which also doubled up as an important race junction. Turn left towards Mt Difficulty and carry on. Or turn right with the 25km competitors and head home. One trekking pole down and slightly shaken, I turned left. Away from ease and towards difficulty. 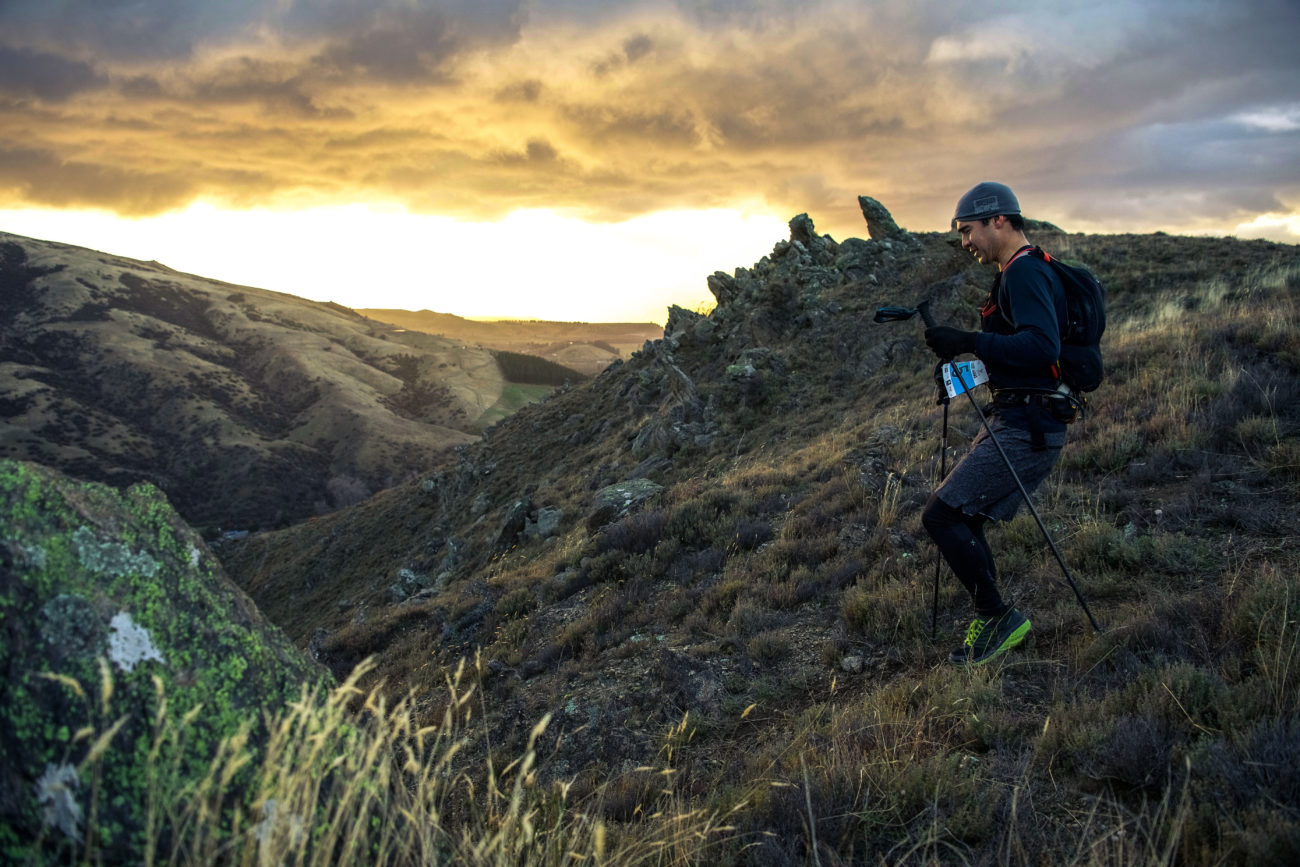 Heading down Nipple Hill as the sun rises

Hard versus easy. Why do hard? It would be fair to say that most people don’t want to do hard all the time. However, how many people out there are always looking for ease in this ‘work smarter not harder’ era? There is no challenge in ease. You cannot grow as a person surrounded by ease. With exercise/life you have to do hard sometimes. Not all the time, just sometimes. Doing hard things makes you appreciate ease. Doing hard things changes you. Although hard things risk failure, there is nothing wrong with failure. It is easy to stay in your comfort zone. But it is far more rewarding to explore your ‘edge’ and risk failure. You may not realise it, but because of your failures, you run faster. Because of your failures, you can run longer. Failure is not a bad thing. Failure makes you stronger! Going up Mt Difficulty is hard work. By now I am scrambling up a vertical kilometre using my hands with fingers full of thistles. I avoid getting intimate with the ‘prickly Spaniard’ plant and search for handfuls of thyme which provide a secure grasp. The climb up Mt Difficulty seems to take forever and is tough going. The multiple false peaks do my head in. I maintain resolve by telling myself to keep going until I hit sky. Eventually I climb high enough and reach the snowline. Onward and upward, I reach the aid station at the top of Mt Difficulty. I test the waters by asking “I guess it’s all downhill from here?” The long silent pause reveals the brutal truth. There was more snow, hard, and harder ahead. Maybe this was the ‘hate’ the race organiser promised. As the climbs kept coming, so too did the winds, sleet, and ominous snow clouds. The good thing is that nothing stays hard forever. Hard eventually gives way to ease. Eight kilometres from the end, a rainbow forms in the distance. I push further away from the mountain and head closer towards the rainbow (and sanity). I’m oblivious to what the time is but I sense the nine hour cut off is approaching as the light fades with the setting sun. As the downhill turns to flat and more vineyards, I know the end is near. More than 8hrs and 40 mins later, the hard lets up and I surrender across the finish line. The hot pizzas at the finish are a treat. Sometimes you have to search for hard in order to find ease. Running is medicine. Join me at my next blog, the WUU-2k Marathon mid July. 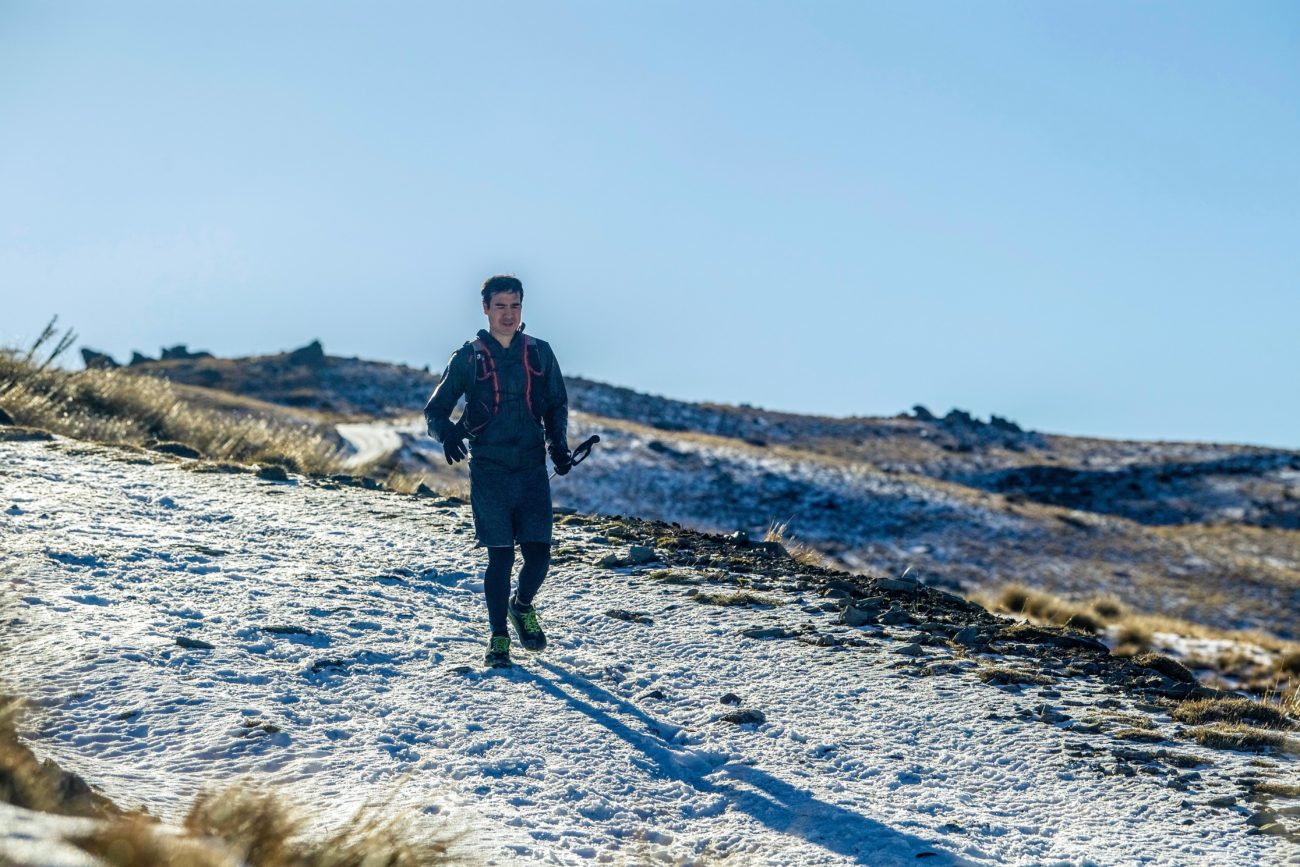 Snow running at the top of Mt Difficulty

It never gets easier, you just get stronger.