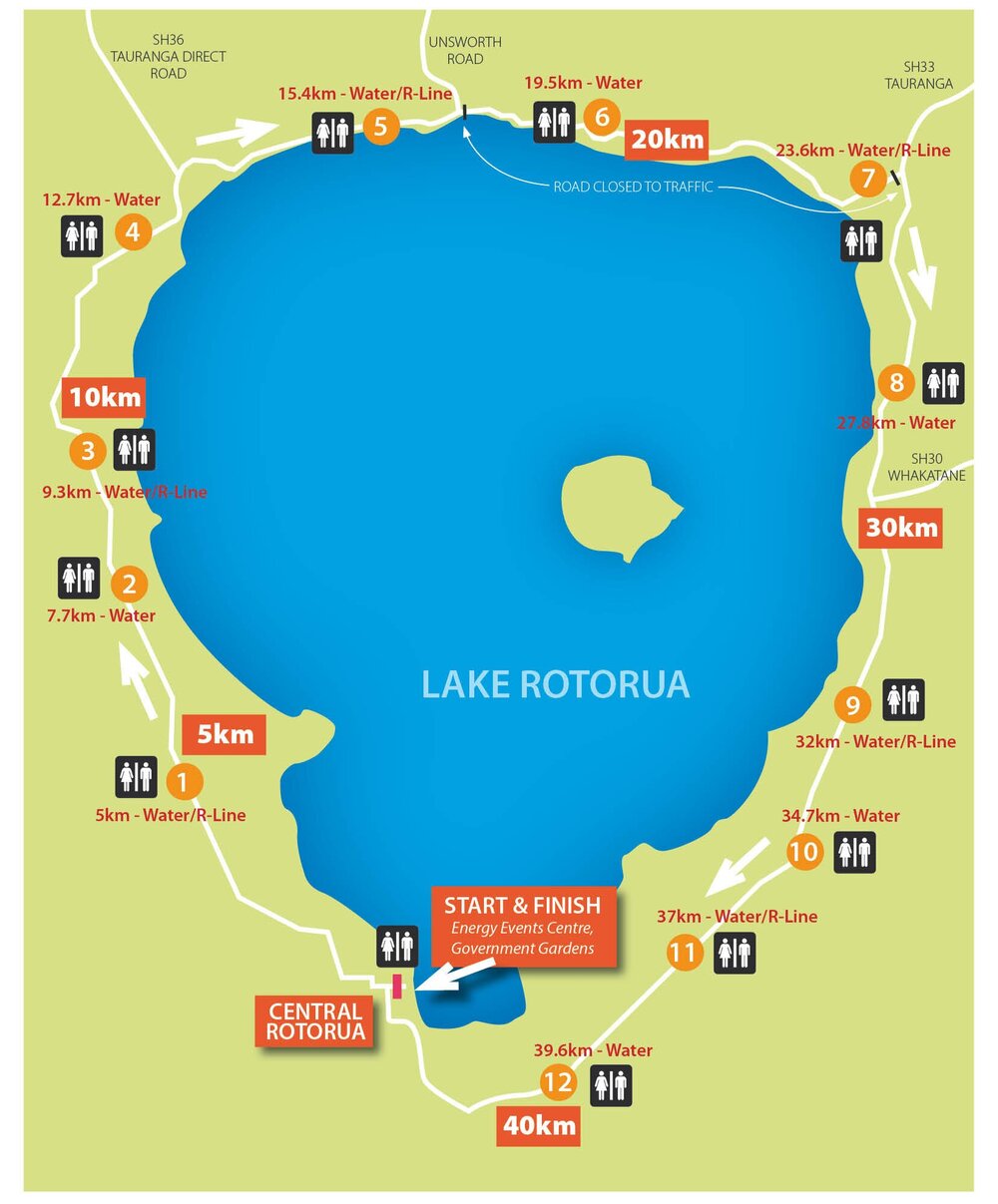 Although I spend most of my time in Christchurch now, I always enjoys running in Rotorua. If there is such a thing as a ‘spiritual running home’, then mine would be Rotorua. Rotorua (and the Redwood Forest in particular) is where it all started for me. What started as 10km runs in the forest during my college years, expanded into longer and more frequent runs around Lake Rotorua whilst training for the Rotorua Marathon. I then continued running when I studied in Dunedin, kept running in my hospital years in Rotorua, didn’t stop running when I moved to Christchurch, and even took running with me when I deployed to Afghanistan with the Army. I just kept clocking marathon after marathon. Soon running became a lifestyle for me and running marathons was simply part of the process. This year was my 12th attempt of the Rotorua Marathon and 91st marathon overall. Even as I write this it surprises me. To sum up how I feel in a few words – lucky and grateful. I happen to be joined at the start line again by another running lifestyle tragic, Dr Andrew Stanley. We keep good company but lately he’s gone another level so keeping up with him as been a struggle. He tells me that he will join me again to ‘keep me honest’. I respond in equal truthful fashion that “I’m as honest as the day is long”. We enter the starting chute in the area designated for those aiming to finish around 4 hours. Now, I’m not sure whether it’s the rain or cold that gets to Dr Stanley. But for whatever reason, he starts moving closer and closer to the front of the start line and eventually past the sign for those aiming to finish the marathon in 2hr 30 mins. Of course, this is not where you want to be if you’re a ‘lifestyle runner’. These runners up the front are like a cross between The Terminator and a shredded gazelle pumped with endorphins. They exude intensity and ooze speed. If you can’t identify them by their hairless, tanned, and sculpted legs, then the sure giveaways are the time splits written on the back of their hand (with permanent ink) and the steely eyed gaze fixed on the finish line 42km ahead. I turn to Dr Stanley and fear he has been transformed as he has a similar gaze. His exposed temporal artery rhythmically pulses as if it were pumping testosterone to all extremities in his body. I sense Stanley is not in lifestyle runner mode today. The cannon goes of and he speeds to the front and I’m like a fool in tow. Here we go again… 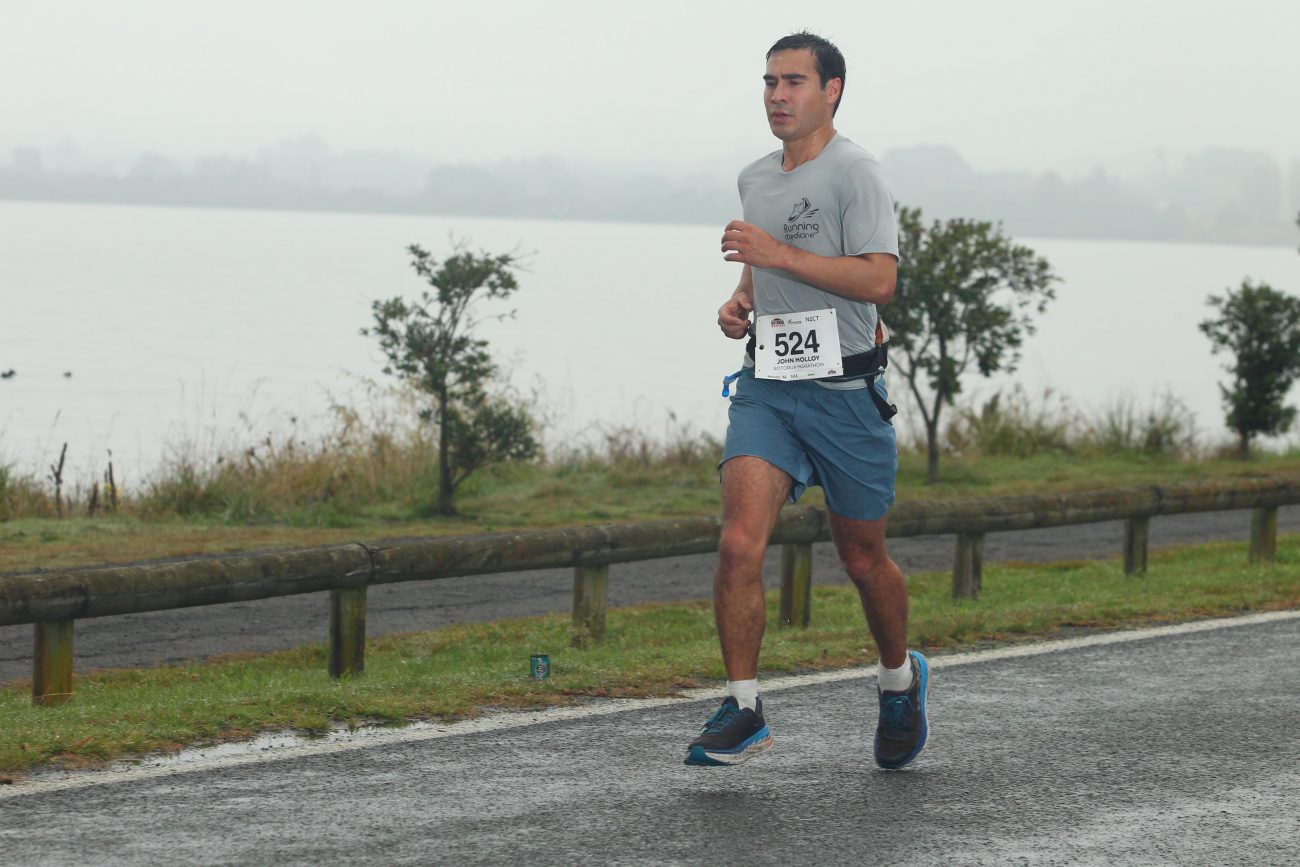 Running along the back of the lake near Hamurana

The main reason I set up Running Medicine was that I wanted to show and be living proof that you can make running a lifestyle. I also wanted to play my small part in promoting the benefits of ‘exercise as medicine’ and educating others on how you can make exercise a healthy life style choice. However, what sounds easy on paper, is quite complex to put into practice. Some of the problems being that the human body is hardwired to be fat, warm, and comfortable i.e., some people don’t have the inclination to exercise. The other problem being that we live in a society that champions winning over participation. An unheralded side effect of professional sport. The ‘if you’re not winning or getting faster, then why should you do this’ mentality. Throughout life, we are told that we should participate in exercise that we like. But what should you do if you don’t like to exercise? We are told to exercise for at least 30 minutes a day. But what should you do if you don’t have the time or can’t afford to? We are told that we should be getting stronger, fitter, faster each day. But what should you do if you aren’t? Life is full of problems and your doctor does not have all of the solutions. What I do know is that you will live a longer, healthier, happier, and functional life if you can exercise for at least 30 minutes most days of the week. You’ll get even more benefit if you exercise for 60 minutes. If you exercise regularly, you’ll be able to keep healthy and continue to support your family. You’ll be able to play and run along with your children as they grow. You’ll be able to live independently and look after yourself long after your children have children of their own. The original policy makers of the ‘30 minutes of physical activity a day’ feared that they would put too many people off exercise if they promoted 60 mins/day so they went with the lesser ‘at least 30 minutes a day’. I’d argue it’s helped to create a society entitled to wellbeing. A false expectation of doing the minimum but expecting maximum health. Over the years I’ve learnt that I can’t prescribe effort. I can’t prescribe time. And I certainly, can’t prescribe money or youth. All I can do is influence your priorities. Because until you make exercise a priority, you will manufacture every excuse under the sun not to do it. If you don’t make the time for exercise now, sooner or later you will make time for illness and dependence on others. You do not need to win. You just need to start. Motivation will get you started. But its habit that keeps you going. People will make the effort and find the time when something is important to them. So, how do you make exercise important to you? 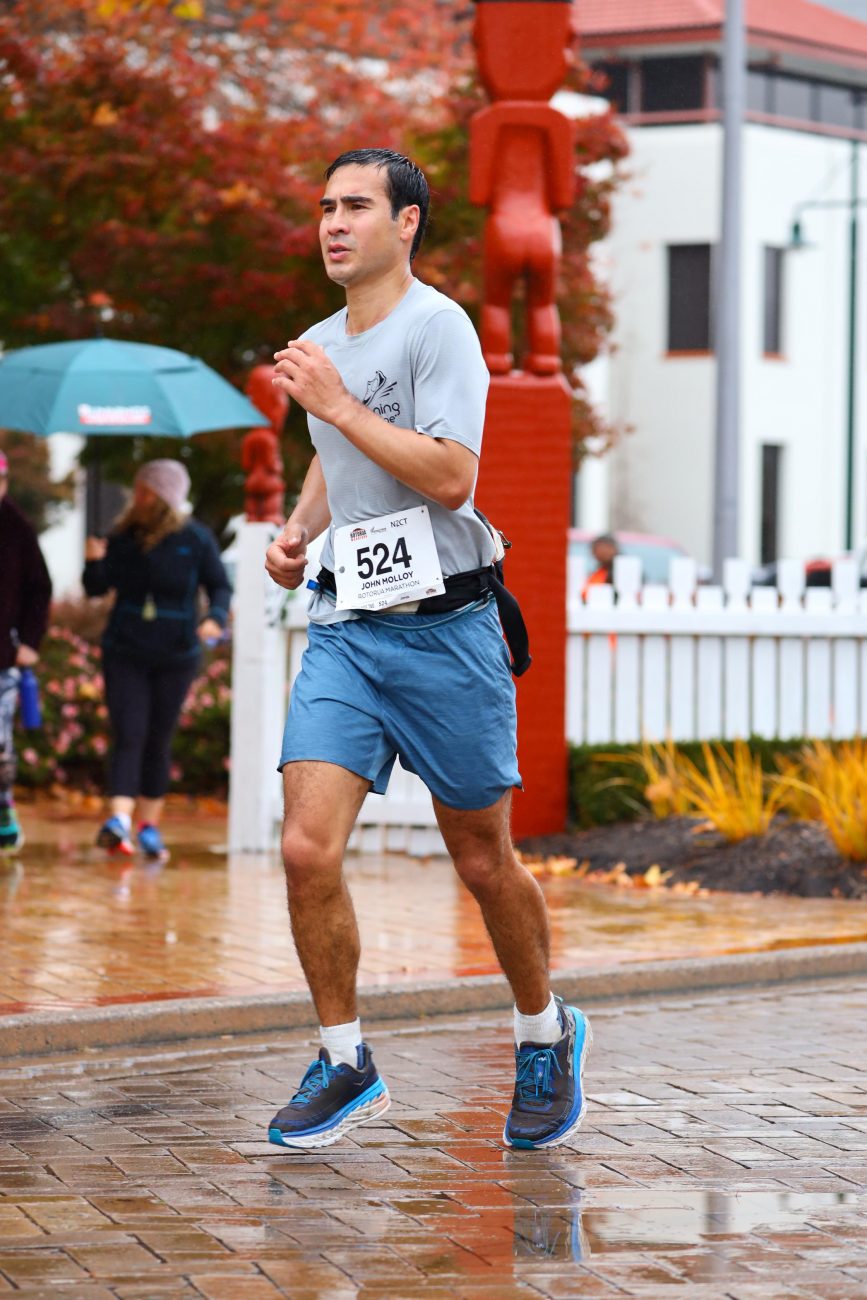 Heading down the finisher’s straight

Although I’ve run a lot of off-road ultramarathons lately, it still doesn’t quite prepare you for the rigors of a road marathon. An off-road ultramarathon teaches you to go further by pacing well interspersed with walking. But an on-road marathon is much faster by nature so holding a faster pace for a prolonged period of time is a discipline in itself. Dr Stanley and I manage to run the first 5km at a 5min/km pace until we suddenly get passed by another Rotorua Hospital doctor, Dr Esther O’Sullivan. We were already going like a bat out of hell and now Esther has unknowingly waved a red rag to a bull. Dr Stanley increases his pace to catch up with her and I sense early trouble (for me anyway). Andrew successfully distracts her focus from the finish line (which is still 37km away) and momentarily slows her down by a skill well practised to any life style runner – initiating conversation. As Andrew and Esther start chatting, I fall in behind them to catch my breath. Dr Stanley introduces me and I learn that Esther specialises in endocrinology which I find slightly surprising as Esther doesn’t appear to have detected Dr Stanley’s excessive testosterone today. We manage to run together until the 15km mark where I eventually drift off their hot pace and fall back. Stanley has left me for a younger and much faster Irish woman. As in sympathy, the heavens open up and it begins to rain. Left to myself, I’m able to run through Hamurana and the hills near Mourea at a much more comfortable pace. However, by the 25km mark, the untempered fast start and hilly middle section begins to take its toll. Soon I’m being passed by the wise who have held back and cleverly timed their surge. Although I know this course well and I’ve been here many times before, it still doesn’t make completing a marathon any easier. You just got to keep on running and eventually you make a habit of not giving up. I keep holding it together past the airport and maintain a good honest pace down Vaughan Road. I cross the finish in 3hrs 56 mins only discovering afterwards that I had run a positive split race. That is, I ran faster in the first half of the race and slowed down in the second half. Marathon 101 states that you should run a negative split race which is the reverse – running the second half faster than your first. Finishing time and splits aside, at the end of the day, none of this really matters. Just ask the true champ, Garth Barfoot, who finished last but in doing so became the oldest competitor ever to finish the Rotorua Marathon (8hrs 53 mins, 2 weeks shy of his 85th birthday). This is the type of stuff we should be celebrating and championing. If you want to be a lifestyle runner, you need to put finishing times aside and just enjoy the process. Keep starting. Keep sweating. Keep running. And if you run enough times, then running soon becomes a lifestyle and the house that you live in. Running is medicine. Join me at my next blog, the Mt Difficulty Ascent 44km in the beginning of June. 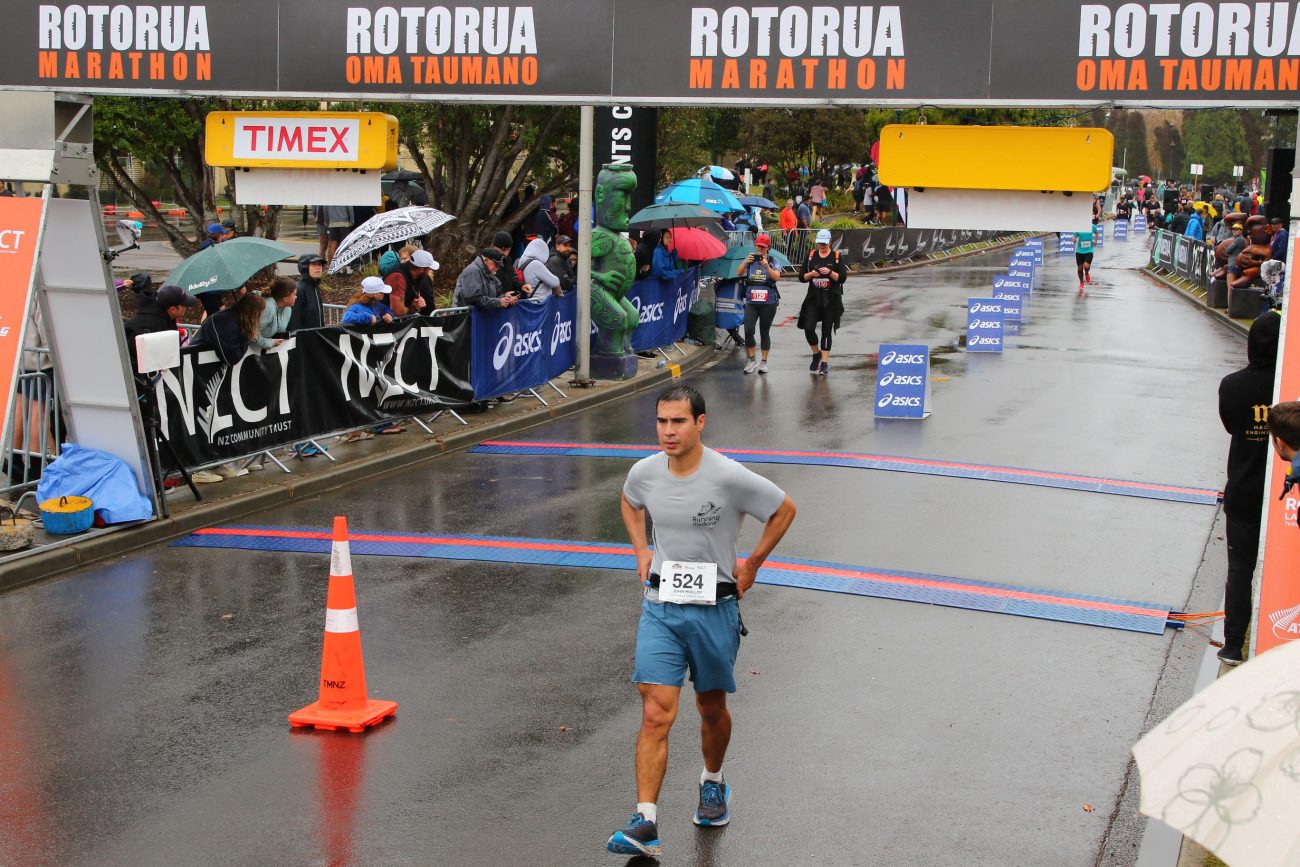 They don’t get any easier

If you run enough times then running becomes a lifestyle and the house that you live in. 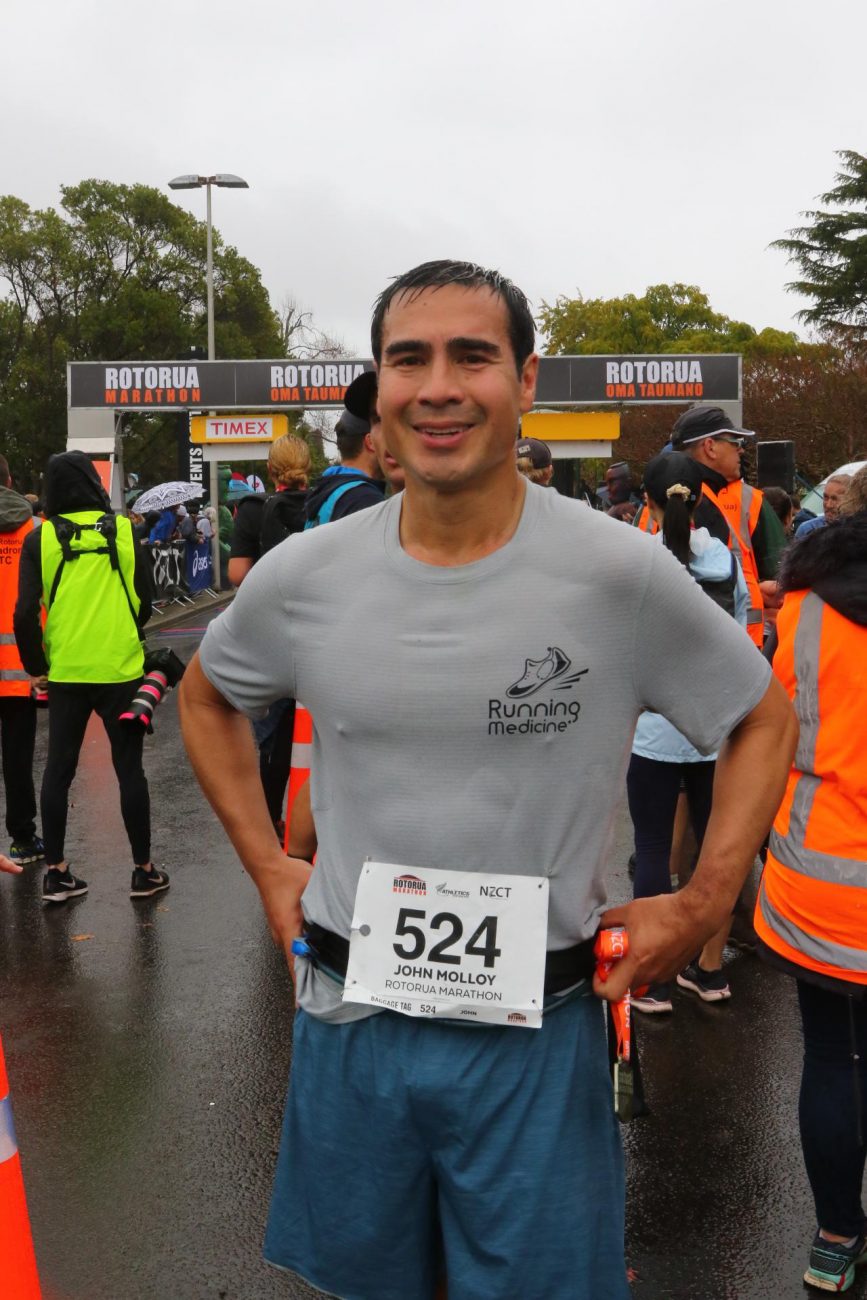