It is fitting that my first blog happens to involve a distance I would’ve never thought was possible. The 100km run wouldn’t top my list of runs to do. It took me 30 marathons to have the courage to run my first 100km – the Tarawera Ultramarathon in 2010. The seeds of which were probably unknowingly planted during my first marathon. Since then I have gone on to run three 100km runs. The North Face 100 (now called the UTA 100) in 2015 was the hardest run I have ever done to date. Set in the Blue Mountains National Park, 2 hours west of Sydney, the course has approximately 4400m of total climb and descent. In 2015, I finished the course in 18hr 40 mins. After starting before 6.50am, I had finished soon after 1.30am the next morning. It was an eye opener into the world of a 100km runner. And here I was lining up at the start line for the third time. 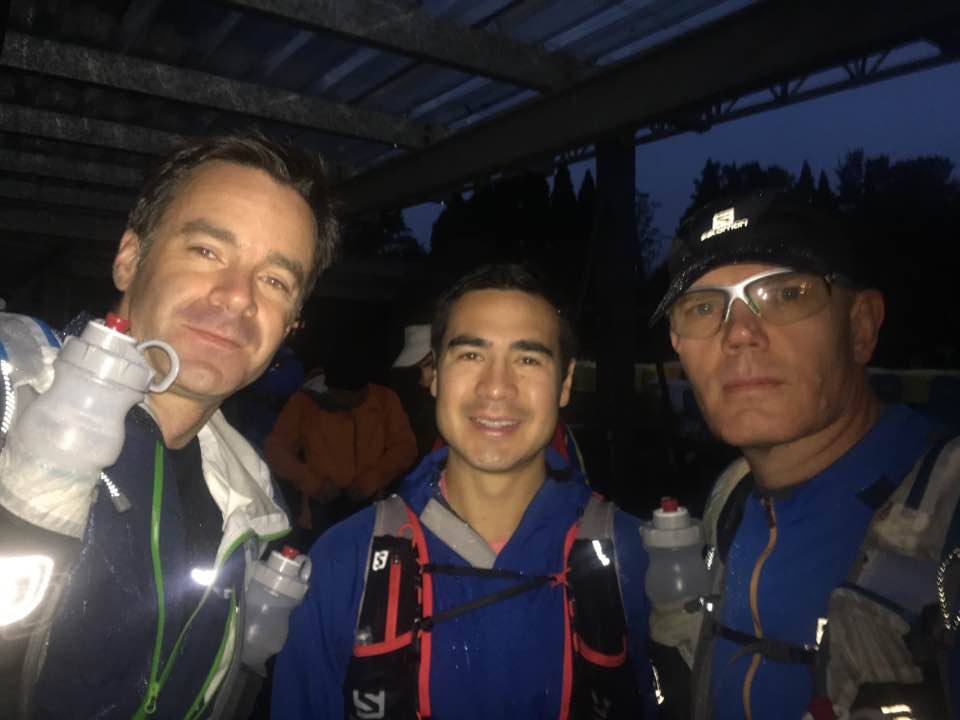 Why? It’s a great question. Too which the answer today is companionship. Two of my running friends, Andrew Stanley and Richard Newbury (both doctors at Rotorua Hospital) had wanted to run it again. Maybe ask them why. I was simply happy to come along and catch up with good friends. Some people socialise over a drink at the bar. I socialise whilst running. Unfortunately, the weather wasn’t looking great with up to 30mm of rain forecast. The race organisers altered the course the night before as a result. I can remember finishing my two previous UTA 100s and thinking “Thank God I didn’t have to do that in the rain”. Rain requires a tougher mind set and a willingness to lube – frequently, liberally, generously, and without fear of judgement. Chafing can bring down the strongest of all competitors and there’s no chafing like in the rain. So when I wake up at 4am and hear the rain pouring outside, I take a deep breath and prepare myself mentally for the worst. That way anything other than hell becomes tolerable. So imagine the pleasant surprise when come 6.40am the rain had stopped. Today, Mother Nature was lenient. 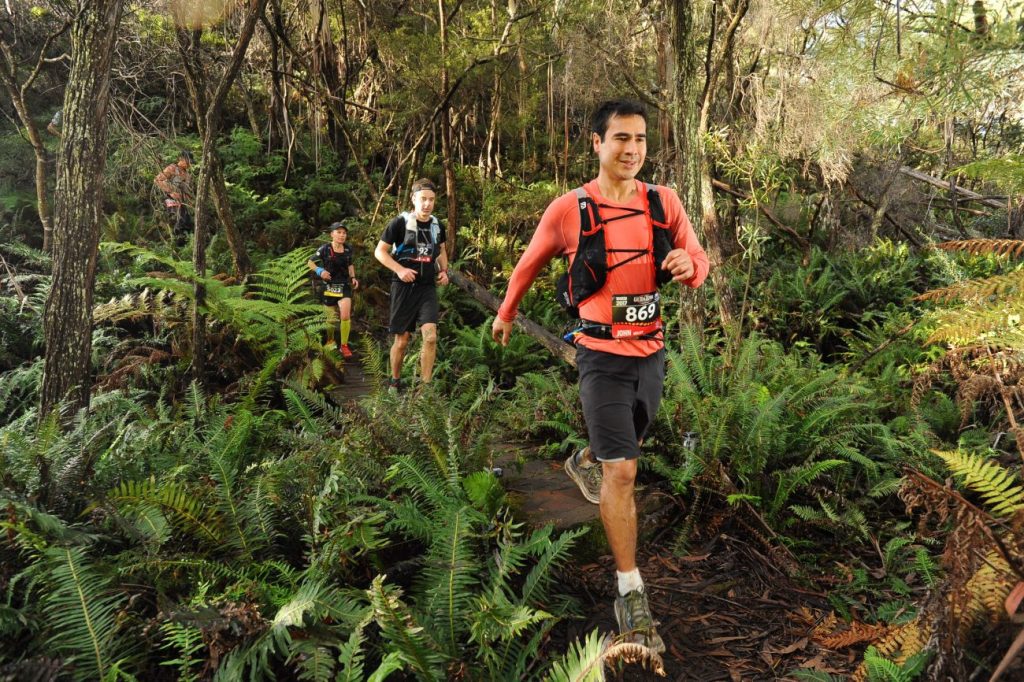 The run went well. I can remember enjoying the first 30km and the 80-96km section. The other 54km was about simply finding a way to keep going forward. Each aid station becomes a goal. Of which the rewards are mandarins, watermelons, raspberry buns, pizza bread, and instant noodles. After all, you still need to find time to eat lunch and dinner!  After ‘thousands’ of steps (I’m not exaggerating as there are too many to count), the quadriceps were toast. The fuel tank was approaching empty and the last 4km was particularly demoralising. The course was brutal and had extracted my willingness to live. The race ends harshly with a steep 300m climb over the last kilometre up the dreaded Furber steps. I had hoped to be ‘fresh’ at the base of the Furber steps. Instead, I had arrived a dead man. It was a matter of dragging my carcass up the stair rails. The Furber steps and last kilometre took me 25 mins to conquer. On approaching the finish line, I broke out into a jog in respect for the supporters who were still at the finish line past midnight. Also, I didn’t want to appear soft. 17hr 21mins later I had completed my third UTA 100. 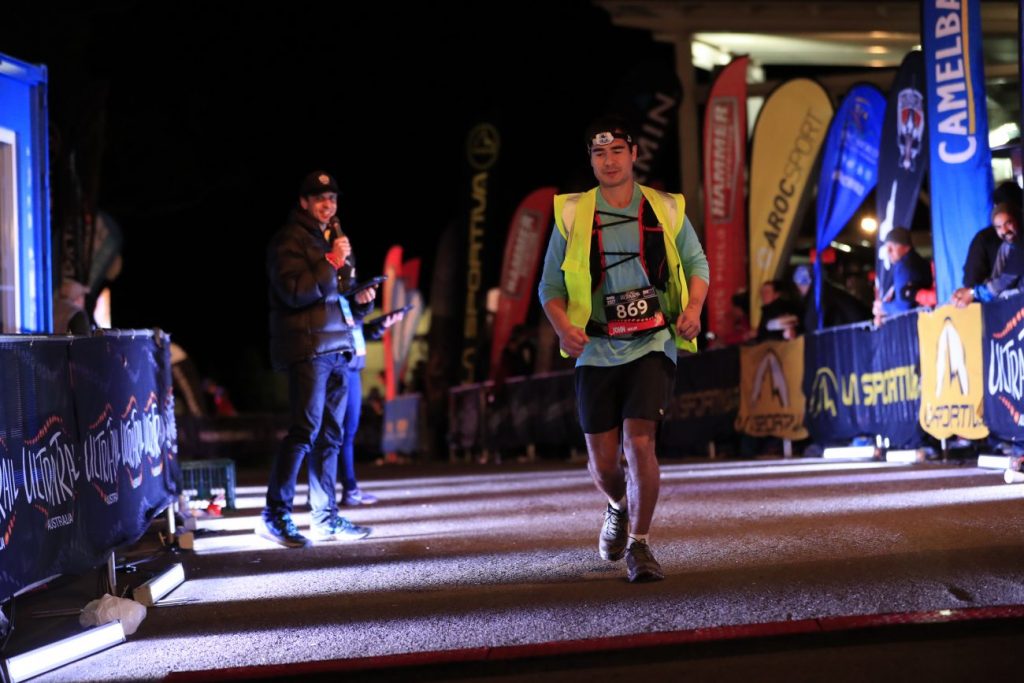 This is what a normal man looks like after finishing 100km

I’ve heard that if you’re running right it hurts. And if you’re not running right, it hurts more. I don’t mean to dwell on pain as that’s not why I run. I don’t seek pain. I run because I enjoy it. But the truth is, every ultra marathoner has to get good at dealing with discomfort. By dealing with prolonged discomfort, only then can you truly appreciate what it’s like to be comfortable. And once you get back to your warm, comfortable lives, it’s not long before the thirst for challenge returns. During your everyday, mundane tasks, you begin to plan your next run. You seek out the extraordinary again. And despite the current mental fog, you realise that it wasn’t that long ago that life seemed clear and you were truly alive. When you run, your heart beats quicker. Your blood flows faster, your breath becomes warmer, and your muscles contract rhythmically. Running is the orchestra of life. Running is medicine. Join me at my next blog, Christchurch marathon, 2 weeks after Ultra Trail Australia.

No amount of vaseline will prevent chafing if your shorts are old. Open the wallet and buy some new clothes from time to time.