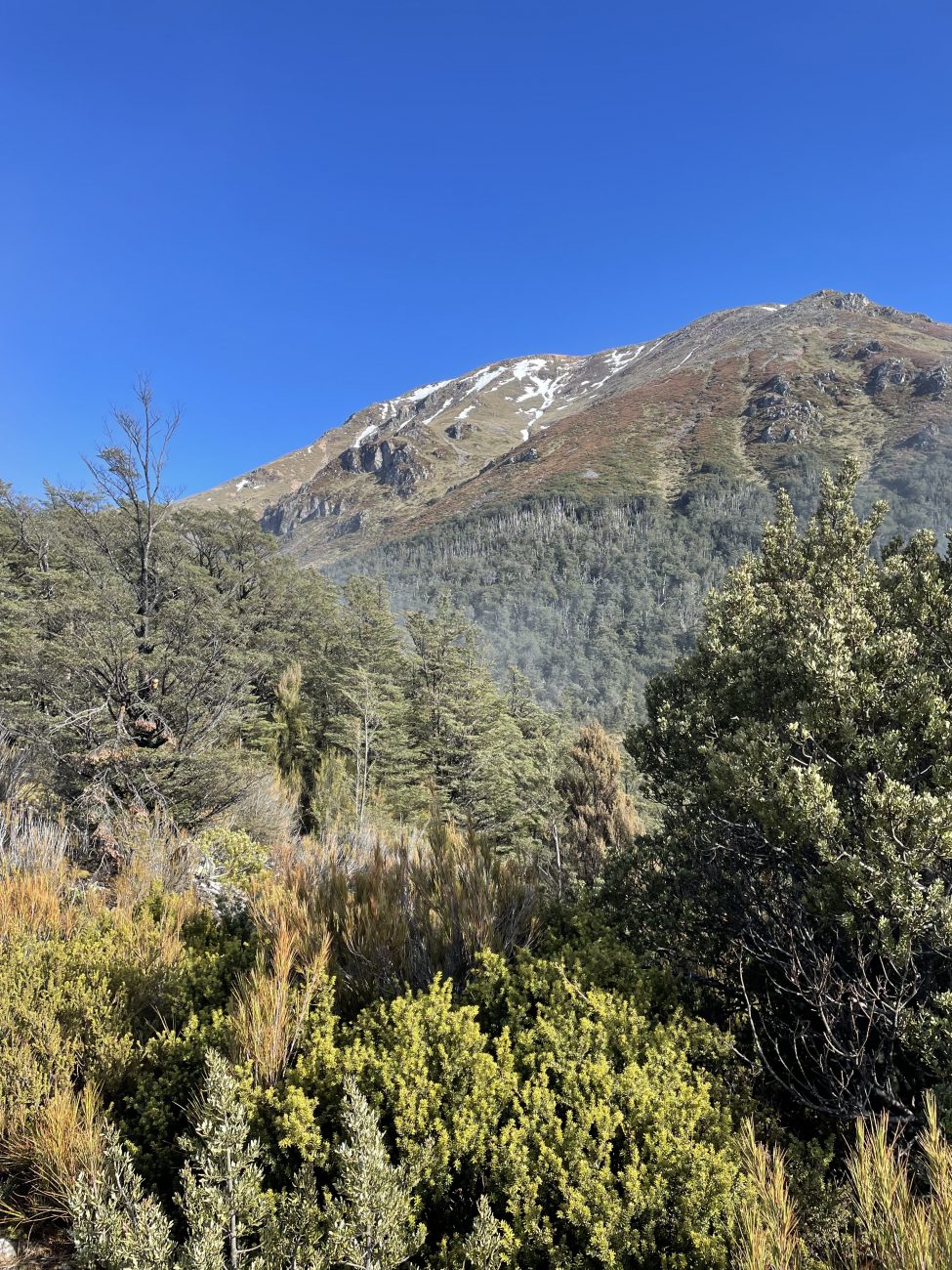 Covid’s been a bit of a wrecking ball for events so I was grateful that the Mission Mt Somers Marathon went ahead. As is becoming the norm for Covid events, there were staggered registration times, staggered starts, mandatory masks at the start/finish area, and no volunteers at aid stations. After a stressful week at work due to Covid, I was determined to not let my busy week compromise my weekend run. In anticipation, I managed to wake up on Saturday before my 3.50am alarm. The pressure was on to make key timings as I had to pick up my cousin Paul (4.40am) and then Dr Stanley (4.50am) en route to the start line at Staveley Village before registration closed at 6.45am. We arrived in good time and joined the row of cars parked orderly in the local farm paddock. Face masks on, we headed to registration to sign in and pick up our race bibs. We were then instructed to return to our car until the 10-minute call before the 7am start. On approaching the start line, there were about 80 other keen marathon runners joining us. After a mentally and emotionally draining week at work, I was feeling pretty tired even before the run had started. However, the start line is my happy place and I knew this was just the pickup I needed. Before long, I had left the stressors (and comforts) of my office behind me. The early river crossings meant that we had wet feet within 5 minutes of starting. The river rocks would wobble or slip beneath your feet and hence intense concentration was required. As we headed up the south face of Mt Somers, the roots from the black beech forest made it a slow and technical climb. So technical that it demanded all my attention and absorbed all my thought processes. The mind began to unclutter and all the stress dissolved. What mattered most was my breathing and foot placement. Nothing else mattered. I was captivated and intoxicated in a trance of breath and movement. 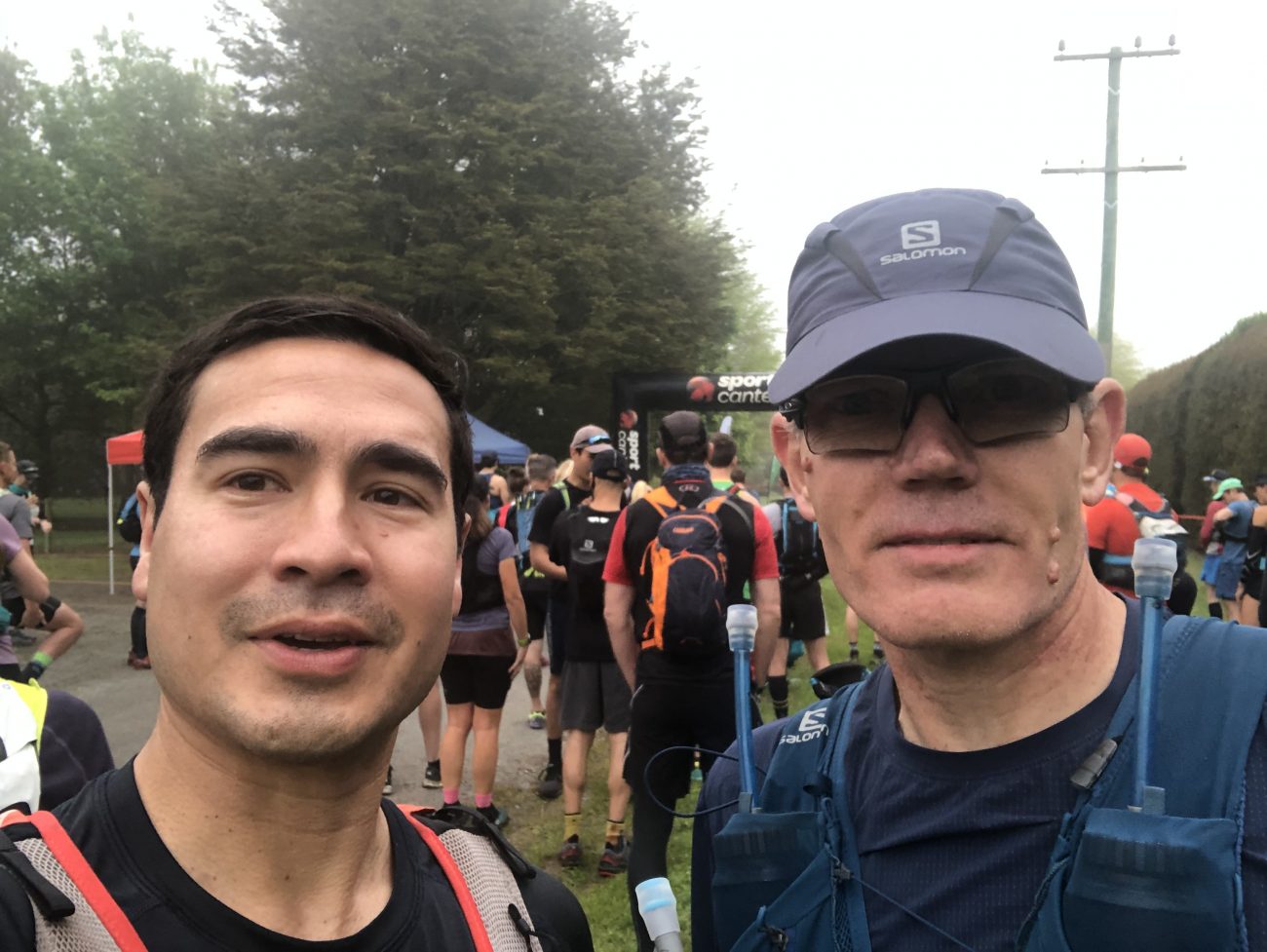 An addiction is an urge to do something that is hard to control or stop. Medically it is often used to describe a ‘substance use disorder’ and falls into four categories. Impaired control (more than intended use / wanting to cut down but not being able to), risky use (use in risky settings and continued use despite known problems), physical dependence (needing more of the substance to get the same effect [i.e. tolerance] and having withdrawal symptoms when a substance isn’t used), and finally, social problems (neglecting responsibilities and relationships and an inability to complete normal tasks at home or work). When I first started running consistently at medical school, a friend of mine told me that I had “a dark secret”. A mentor of mine during my registrar years warned me that running was addictive and refused to run with me. Many just told me I had ‘the bug’ which is probably just the polite way of saying you’re addicted. If so, then I probably fulfil all the categories described above with the exception of being able to maintain my social responsibilities (though even my family would argue with the latter). And I can see why. My small network of friends are all runners. Those friends who don’t (or have stopped running) have been left behind. The vast majority of our family holidays are ‘running holidays’. When I travel around NZ (or the world for that matter), it’s primarily to run. And if it’s not to run, then I’m sure to find an event that will fit into our schedule. So maybe I’m a ‘high societal functioning’ running addict. Maybe I’ve had one too many runs over my lifetime. But if so, is that really a bad thing? I don’t drink, smoke, or gamble. I don’t online shopping binge and keep away from large boisterous mobs. In fact, I spend the vast majority of my money running on my own. If I wasn’t addicted to running, then what else would take its place? I don’t have the taste for drugs or alcohol. I loathe social media. I don’t think I could ever be addicted to work. Sex? Well, in the best interests of my wife’s longevity then hopefully not. Hence running has become my addiction of choice. Today, my cousin Paul is doing his first half marathon. He’s had a few issues with drugs and has been in and out of jail as a result. Being unemployed, he had time but not much money. So I paid for his entry and we’ve been running once a week in the Port Hills in preparation for Mt Somers. Over the last few weeks, he’s been literally clearing tar from his lungs and abusing his body in a different way. He’s diligently progressed from walking, to a walk/jog, a jog, and then short bursts of running such that he’s made it to the start line today. “When I run, it feels just like I’m stoned” Paul says. It’s been an interesting insight into an addiction of another kind. One with more stereotyping and stigma than my own. All these years during my long weekend runs, have I just been trying to get stoned but in a different way? I’ve always believed that the best way to treat an addiction is by replacing it with another (positive) addiction. In Paul’s case, I’m hoping that running can get him back on the straight and narrow and give him a fresh start. Who you are, what you do, and your previous life choices doesn’t really count for much in the trail running world. The main thing you’re judged on is effort. I also don’t think there’s a correlation between the severity of a drug addiction and your running ability. But if there was, then I’m sure Paul has the potential to be a really good runner. 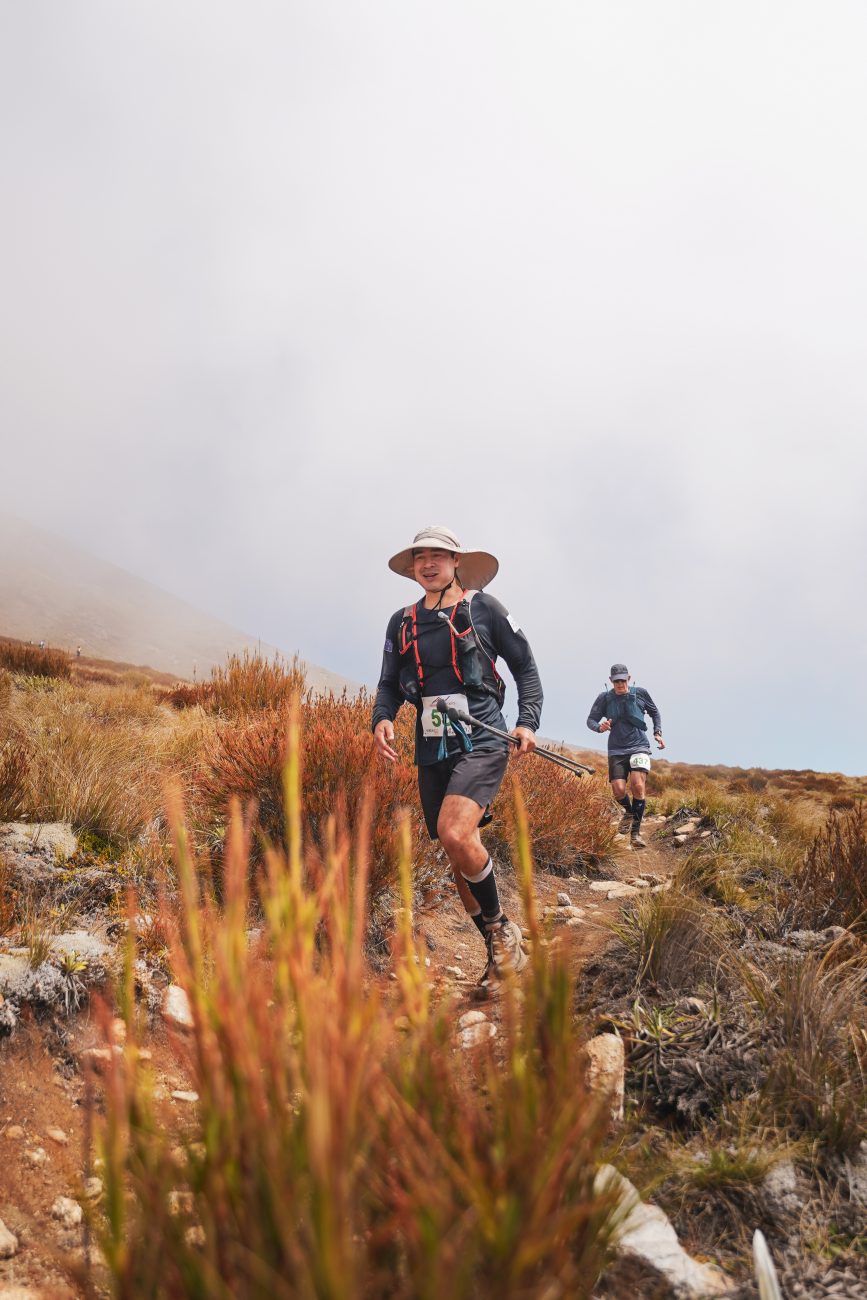 Passing through subalpine terrain with Dr Stanley close behind

The busy work week and early start have taken it out of me for the first half of the run. It’s like I’m hung over from my working week as I struggle to shift the mind fog. My eye movements induce a headache and I’m finding it hard to focus. As a result, I’m easily losing my footing and starting to trip up more. In my whole life. I can’t recall many experiences where I’ve felt worse off after a run than before it. Runners just know this is part of the game. We all experience lows at different times. However, we also know that an impending high is just around the corner (or one gel away). You’ve just got to keep moving! As the climb through the dense beech forest levels out, I’m greeted by the spring snow-capped mountains and jagged rhyolite cliffs. It’s then a mix of open tussock with plains as far as the eye can see and more forested catchments. The mind fog slowly clears as I descent down Mt Somers and I begin to feel much better. I eventually catch up with Dr Stanley at the half way point at the Woolshed Creek carpark and run in his slip stream for a bit. The trails are not as technical so the mental strain is less and running becomes easier. We make good steady progress up the saddle surrounded by mountain ranges. We begin to pass people again which releases more endorphins. As we pass Pinnacles Hut, we leave the subalpine environment behind us and enter more beech forest again. The next section is pure running bliss as we move along and through waterways. I splash my face in rivers to freshen up and can’t help but dip my head under a small waterfall. The coolness at the back of my head is invigorating and I feel reborn – nature’s baptism. It’s then more technical trail along stream beds and forest until the farmlands return. We both cross the finish line in just under 8 hours. Powered by the runner’s high and both clearly under the influence of running. Paul and a few of our doctor friends are waiting for us at the finish line. He’s done exceptionally well having finished a very tough half marathon in 4 hours and 20 minutes. He seems very happy, “Imagine if I trained” he says. “I wish that I’d done this ages ago”. Running is addictive. But I also firmly believe running (and exercise) can beat unhealthy addictions. Don’t let drink, smoke, and drugs ruin your life. Get addicted to sweat. Earn your highs. Running is medicine. Join me at my next blog, The Valley Ultra, 58km Whole Hog at the end of November. 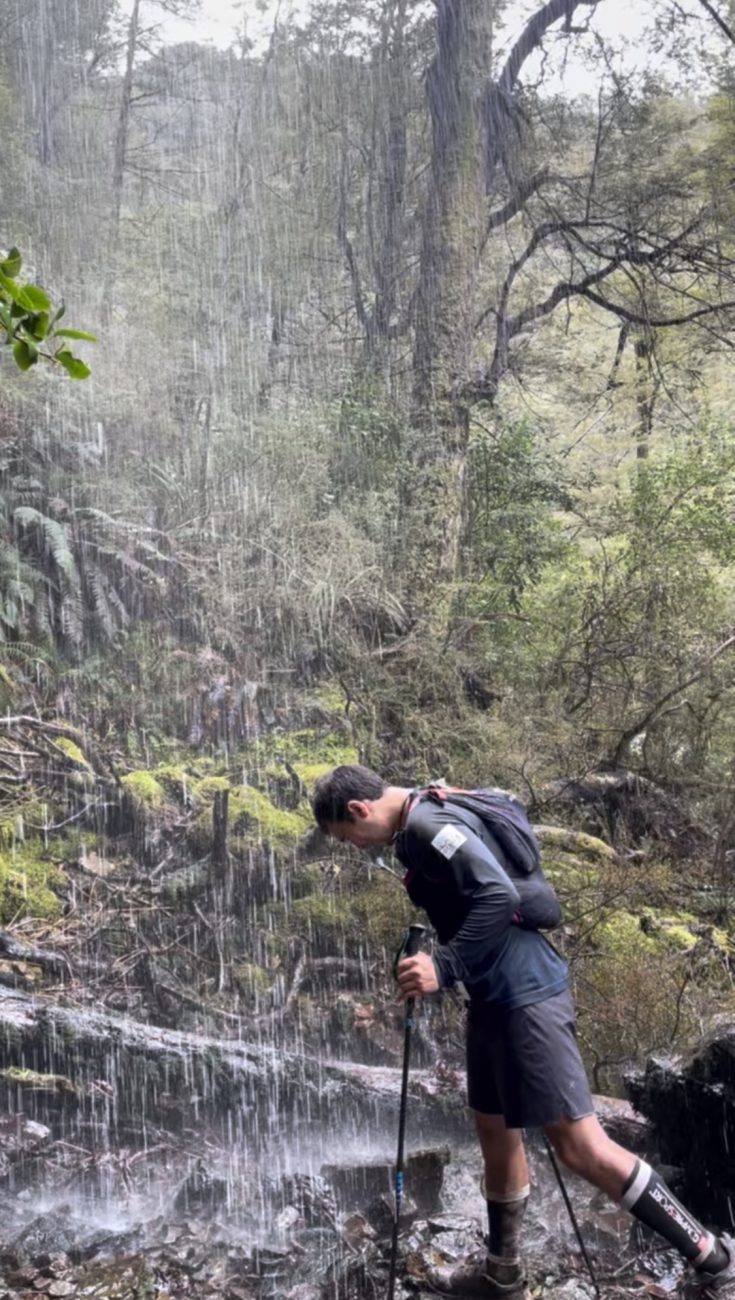 Waterfall bliss. This is why we run! Nature’s baptism 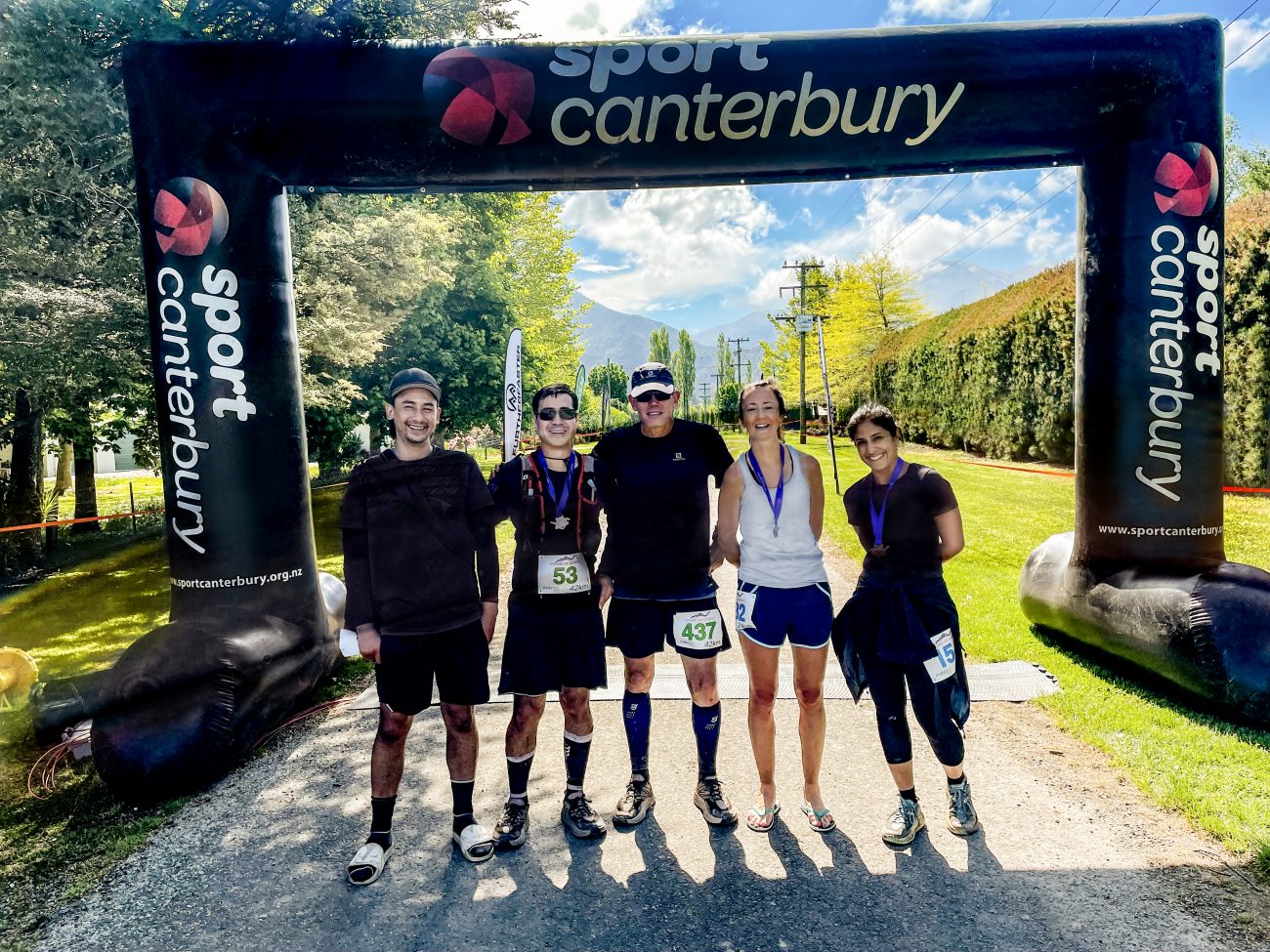