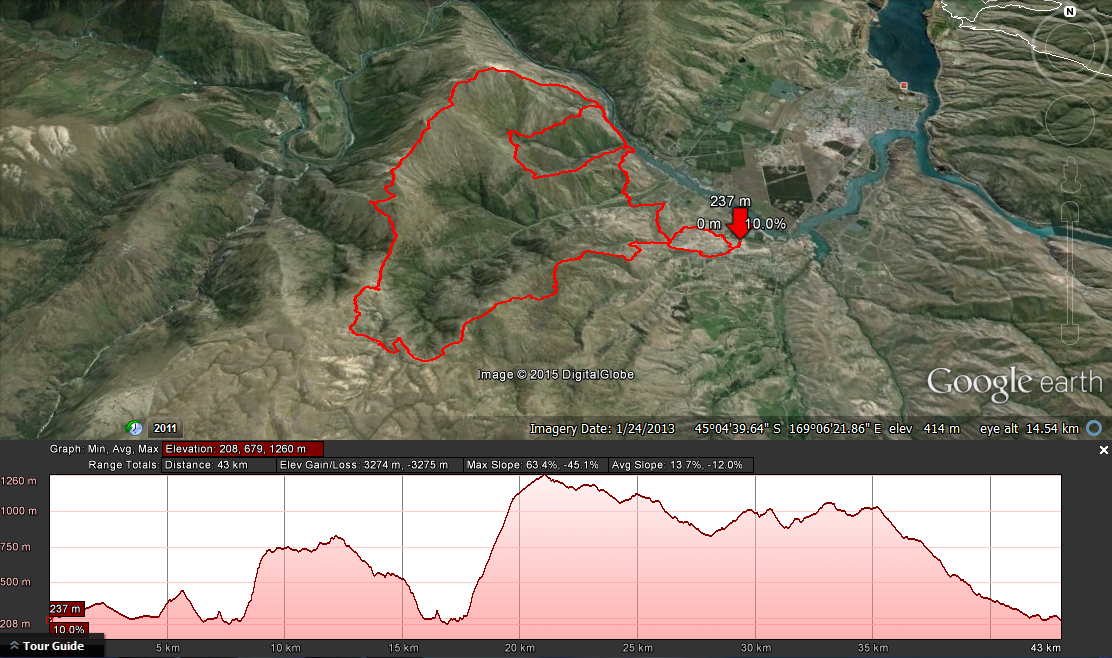 I must admit, I don’t particularly like Mt Difficulty. The name itself is not overly inviting. It’s a gruelling 44km with a total elevation gain of 3200m. A large proportion of that elevation gain is up trackless terrain. It’s in June so it can be cold and windy with a high probability of snow. There’s lots of scrambling, rope aids for steep descents, and lots and lots of tortuous, punishing climbs. Mt Difficulty smashes the running status quo as there’s as much hiking as there is running. Despite my initial reservations, my good friend Dr Andrew Stanley had managed to convince me to enter again. The last time we entered together in 2019, I had managed to snap one of my trekking poles during a perilous descent whilst scraping under the race cut off time of 9 hours. Dr Stanley didn’t fare any better and failed to progress past the 28 km aid station. However, after a year of consistent personal bests, Dr Stanley was hell bent on Mt Difficulty redemption. As if to further reinforce his recently acquired alpha male status, I arrive in Cromwell greeted by Dr Stanley’s all female entourage. Somehow, he had also managed to convince his wife Michelle (half marathon) and work colleagues Dr Esther O’Sullivan (44km) and Dr Neena Kalsi (25km) to join him. All of whom were oblivious to what lay ahead. Being previous participants, Andrew and I were not required to attend the pre-race brief. However, we decided to attend anyway as we felt it prudent that both Esther and Neena should know exactly what they were getting themselves into. What followed was an honest and entertaining brief of what lay ahead. A short background of how the event came to be. A combination of boredom and anger culminating in race director Terry Davis’ sick fantasy. We were warned about the 14-minute kilometre and to prepare for the 30-minute kilometre. There was a short biology lesson on what to grab during steep ascents (thyme) and what foliage to avoid or “not fraternise with” (a couple pictures of plants with prominent thorns). We received dire warnings of rock fall and of the possible risk of death. Apparently if one were to lose their balance and risk imminent death, they should assume the star fish position in the desperate hope that traction may be obtained via contact with thorny shrubs or sharpened rocky outcrops. There was a brief outline of the course profile and how at one point, the course flattens somewhat from “What the hell” to “really, really steep” followed by “really steep”. Finally, the brief ends with how the perfect race should take you through the full spectrum of human emotion including hate (“You will feel hate towards the end”). I turn towards the stunned and expressionless faces of Esther and Neena. Esther appears concerned whilst Neena looks white. The car ride back to our residence is filled with apprehension and uneasy back seat shuffling. Filled with nervous energy, Esther and Neena discreetly depart to their shared quarters for the night. I sense they will have a restless night. 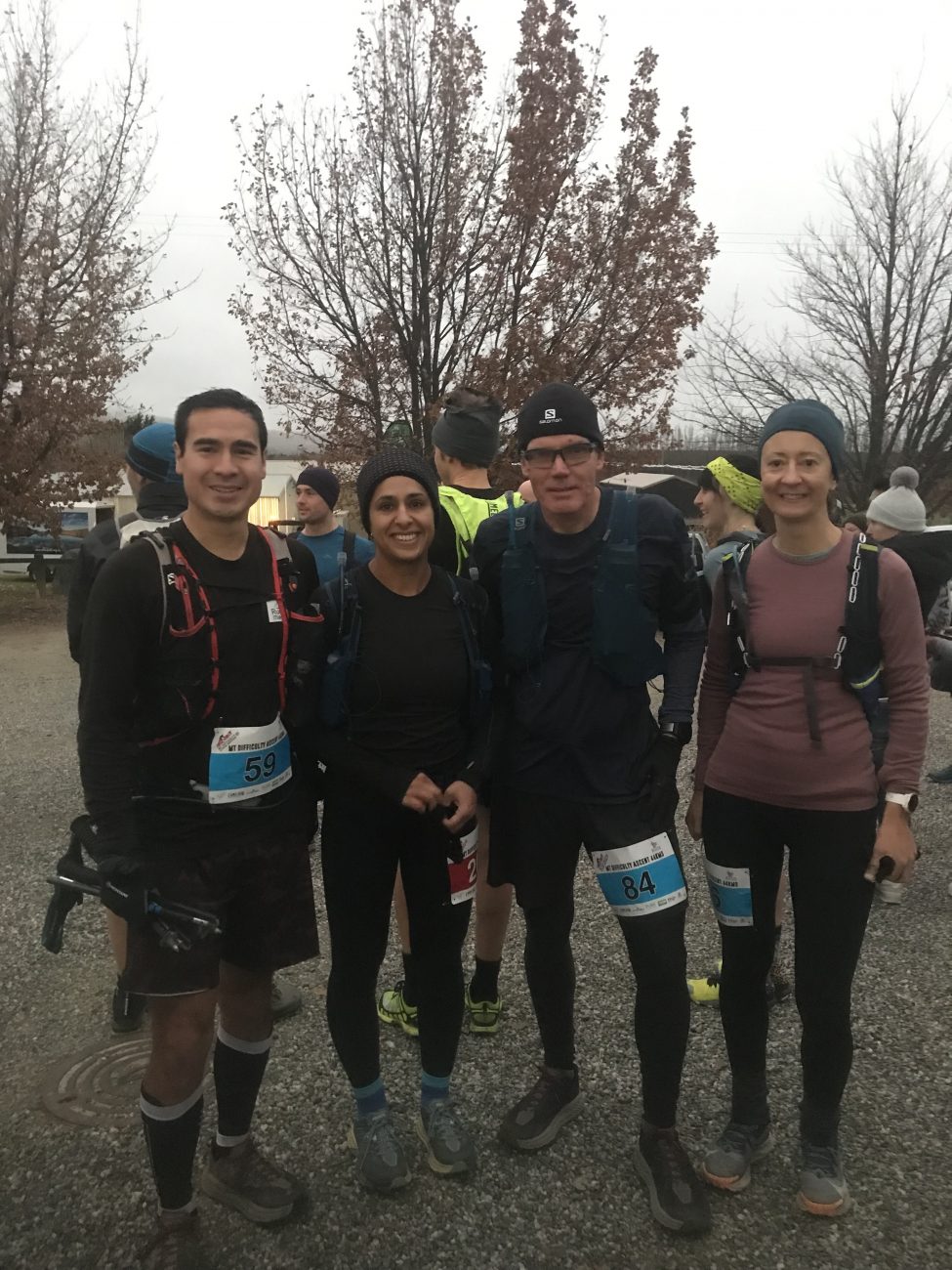 As mentioned, I don’t particularly like Mt Difficulty. Why? Because it’s hard. Really hard. That’s the truth of it. It pushes me to my limit and stretches me both physically and mentally. I like going to a new destination, seeing new scenery, spending time with friends, and the satisfaction of finishing. But I don’t like the whole 44km of the Mt Difficulty course. Parts of it I like. But not all of it. So, why do it? We are commonly advised to do physical activity that we like. Certainly, if one likes a particular type of exercise, they are more likely to keep doing it. But what if you don’t like to exercise? There are people amongst us who have no desire or inclination to exercise. The most honest excuse I come across – “I don’t like it” or “I don’t want to”. The reality is, the vast majority of us are hardwired to be fat, warm, and comfortable with little desire to engage in any exercise – particularly if it’s difficult. During medical school, I hated sitting behind my desk studying from 8am to 10.30pm. I did this for countless days, months, if not years. Saturday nights were the hardest as it felt like everyone else was having a great time except me. To help, I put a quote up in direct eye sight that said “If you like it, you’ll learn it. So learn to like it”. We all need to learn to like exercise. Also, you can’t expect to like exercise all of the time. Ultimately, physical activity needs to be added to the list of things you already habitually do but don’t necessarily enjoy e.g. brushing your teeth, cleaning up after you, cleaning the house, taking out the trash, and going to work on Monday. Though we may not like doing these things, we can still obtain the benefits and the satisfaction from doing these tasks. The most compelling reason you need to learn to like exercise is that it’s “use it or lose it from your 30s”. We start losing muscle strength and muscle fibre size from our late 20s. Our peak bone density is in our early 20s. Our maximum heart rate reduces by 10% a decade from our 30s. Our peak metabolic rate is during our late adolescence / early 20s and then our metabolism slows (ever wondered why weight loss during your middle-aged years was hard?) Our reaction times are best in our mid-20s. From then onwards, nerve impulses are conducted less efficiently due to myelin degeneration and our reflexes and coordination decline. Resting is rusting. Exercise defends thy youth and slows the aging process. I see a lot of patients in my clinic in their 40s to 60s with “injuries” when really life is starting to catch up with them. They present with pain and “injuries” from activities of daily living when actually it’s a reflection of aging gone bad. The more sedentary they are, the more it begins to blur with disease patterns. Aging causes a decline in fitness. But then our decline in fitness makes us age further. Truth be told, many of the things we attribute with aging are actually caused by disuse. And sadly, sitting back and putting your feet up because you’ve had a hard life will not ward off this relentless aging process. If you don’t learn to like exercise now, the alternate is learning to live with disease and premature aging. It’s use it or lose it from your 30s. What are you doing about it? 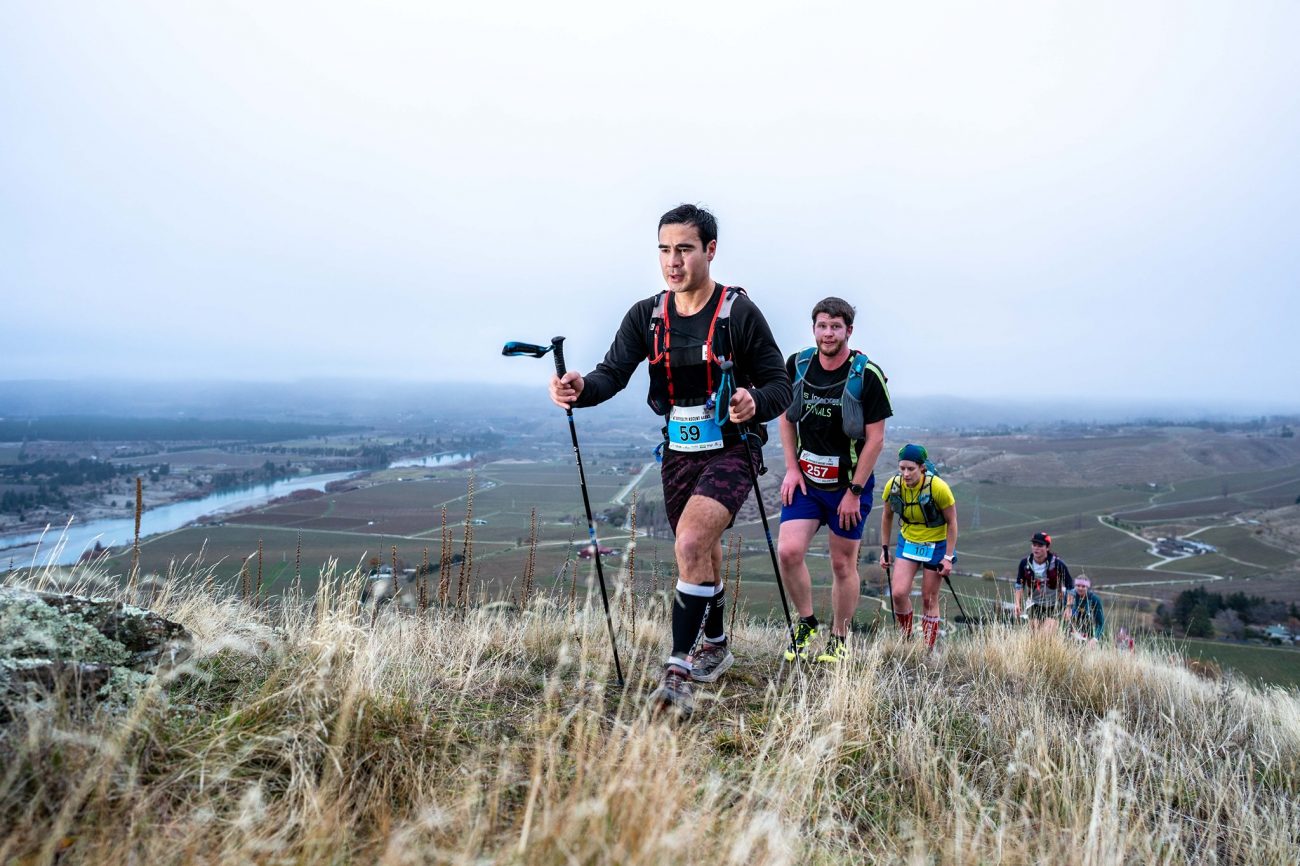 So here I am at the Mt Difficulty start line. Hopefully short term suffering for long term gain. It’s brisk but not as cold as it was in 2019 when there was snow and strong winds. I resist the temptation to put on too much clothing as I know we’ll be climbing soon. Better to be cold for a few minutes than having to stop 5-10 minutes into the run and delayer due to overheating. We all set off just after 8am. Dr Stanley and Esther race ahead while Neena holds back still clearly psyched out by the race director’s brief from the night before. As we head past the vineyards, we encounter the pleasant fragrance of wild thyme. However, from then on, all pleasantries stop as we begin to climb. The pre-race brief described Nipple Hill as the warm up but already my calves are burning, I’m heavy in breath, and sweat drips from my brow. The decent down Nipple Hill was an introduction to the ‘gnarly’ that was promised. The sharp descent demanded my full attention as I cautiously negotiate the loose soil and serrated rocky out crops. The next couple of kilometres is on undulating 4WD track along the Kawarau River until we hit the most significant climb of the race to date. A steep 500 metre climb over 1 km. This is where the madness starts. The orange markers take us straight up a trackless ridge. I manage to catch up to Esther (who is leaning forward so much she is almost fraternising with the ground) but there is no sight of Dr Stanley. After a slow toil to the top, it’s a relatively enjoyable run along a water course, more 4WD track, and along another ridge until I reach my nemesis from 2019 – the rope descent. After snapping my trekking pole previously, I was determined not to go head over heels this year. I put my poles away and switch to self-preservation mode and descend ‘abseiling style’ until I’m safely at the bottom. My elation on getting one up on the course this year is short lived as I approach the most formidable climb of the whole course – the ascent up Mt Difficulty itself. If the earlier climb was madness, then this is on a different stratosphere of disturbing. We are now required to ascend 1km over 3km. A welcome to the 30-minute kilometre that was promised earlier. By this stage the ground is at eye level and the preferred mode of movement is the scramble. The climb is relentless. So high that you climb above the clouds and the mountains are your only witness. Although there’s no snow on the top this year, the cold wind still bites so I can’t appreciate the view for too long. I’m also feeling slightly nauseous and dizzy which is my physiology telling me that I need to descend and head closer to sea level. For the remaining 20km I just roll with the punches determined not to be consumed by hate. There are a few more hills but I know that I’ve endured the worst of it. I eventually cross the finish line at 7 hrs and 40 minutes. On crossing, I manage to spot Dr Stanley. He is surrounded by two thirds of his entourage whilst being intermittently massaged. I can tell he’s been there for a while by the remnants of his pizza and almost finished craft beer. That’s a pretty impressive effort for a guy in his late 50s. Though we may not like exercise that is hard, we still need to occasionally punish our bodies to extend our lives. Nothing worth doing is easy. Learn to like exercise. If you do, you’ll find an ally to defend your youth. Running is medicine. Join me at my next blog, the Resilience Ultra in early August. 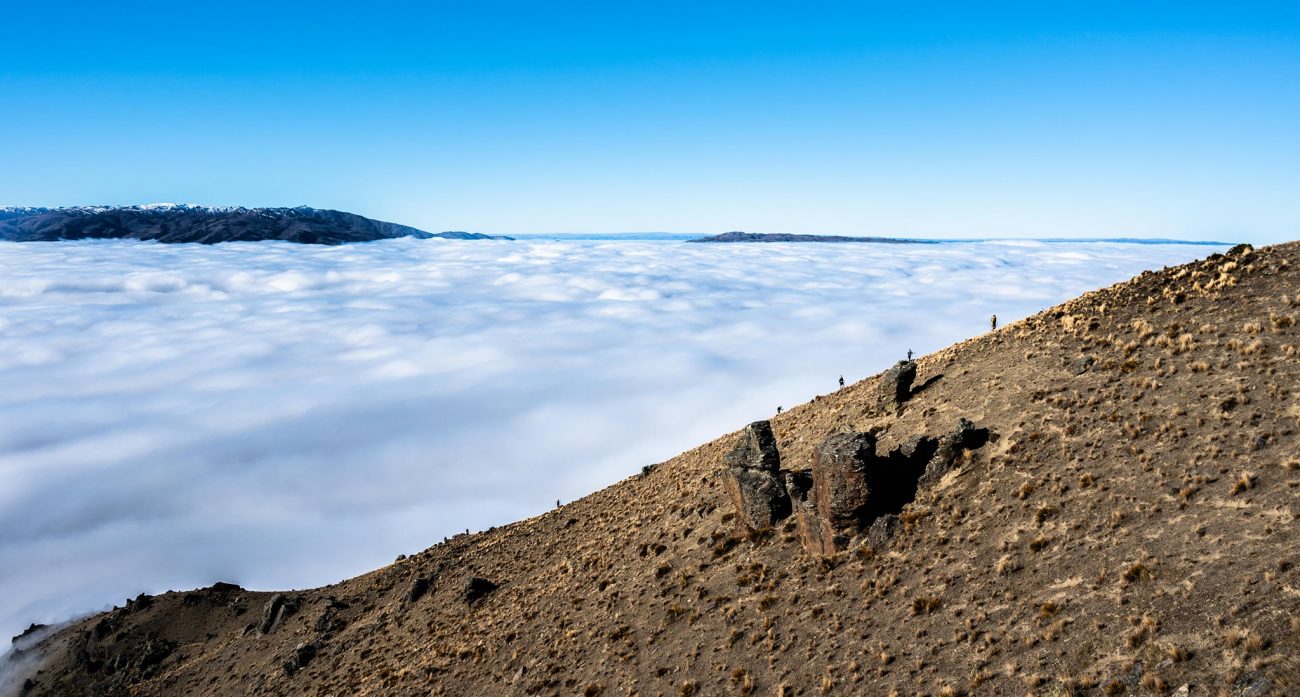 The procession up Mt Difficulty 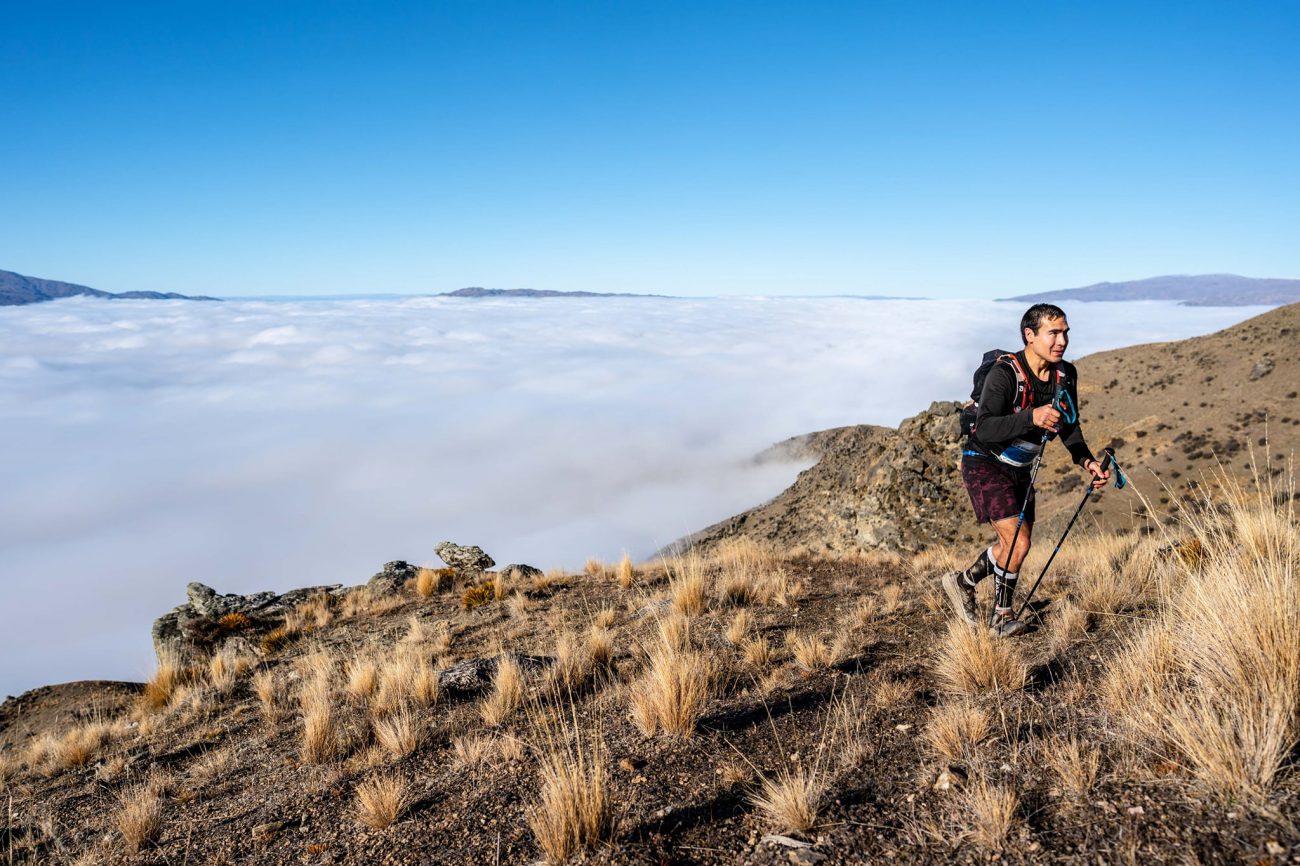 Over the clouds and still climbing