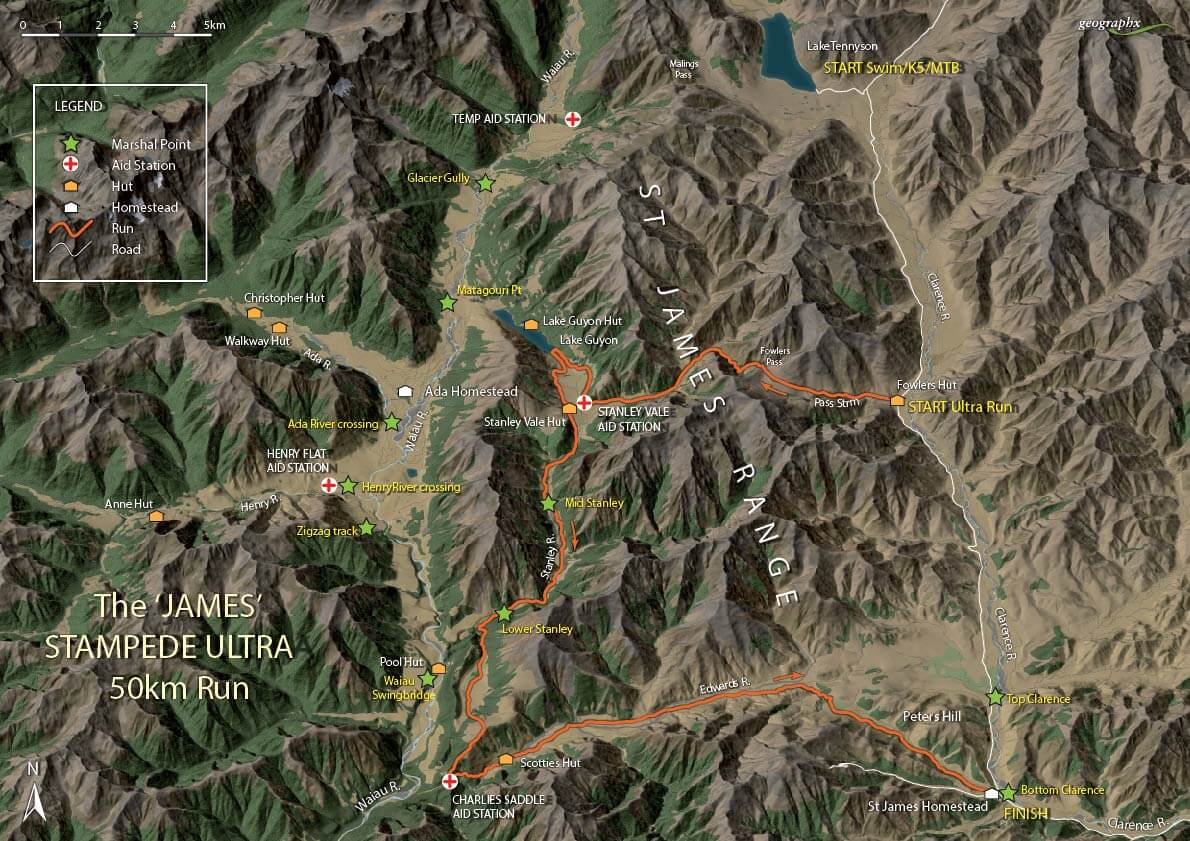 My Wife’s dietician: So what’s John up to this weekend?

Dietician: Why’s he doing that?

Wife: Because he’s an idiot.

I was really looking forward to participating in The “James” Stampede Ultra (50km). Mainly because I’ve never run in the St James Conservation Area before but also because it doubled up as good training for my pending Southern Lakes Ultra (300km run over 7 days) at the end of February. But as my wife Courtney is driving me down Tophouse Road just after 5.30am (a one hour stretch of gravel road to the start line), I’m beginning to wonder whether she’s right again. When we get to the start line at Fowler’s Camp around 6.30am, the sun is just beginning to rise and its quite crisp outside. The camp ground isn’t what I envisioned it to be. In the middle of nowhere, there stood a lone rusty tin shed (Fowler’s Hut) within a stone’s throw of a long drop. There is only one other competitor there and I’m beginning to wonder where everyone else is. After all, race registration was only 20 mins away at 6.50am and the race was scheduled to start at 7am. As Courtney drops me off, I thank her for her commitment and tolerance. She then turns around and heads back down the one hour stretch of gravel road back to Hanmer Springs again. Eventually a couple more cars arrive followed by a hire van which drops off a gaggle of runners. We all naturally gravitate towards the long drop and then into Fowler’s hut to shelter from the cold. Inside, the hut is very barren. There is one wooden table and on the wooden floor next to it, a sole bloke in his sleeping bag. Good God, I thought. This run is not for the weak. With only a handful of runners participating (<20), you invariably start chatting to a few runners. Tom from Christchurch is back for his third attempt at the ultra after coming second in his previous outings. He tells me that this is not the hardest ultra, but it’s probably the hottest. I ask Tom whether the first 4.5km to the top of Fowler’s Pass (1300m) is runnable and he responds in the affirmative. “There are a few sections on the course you’ll have to walk (as it’s impossible to run). But you shouldn’t have to walk the first bit.” He also mentions how it gets really hot along the long road back to the finish. “That’s the toughest bit. Last year when I crossed the finish line, I could barely breath as the air was so hot!” I then engaged in a brief conversation with a lady who was about as thin as the Fowler’s Hut door and must’ve been in her 70s. “I did this about 15 years ago so I figured I’d do it again before I get too long in the tooth” she mentions. I stand in silent disbelief. Sensing she was waiting a response; I finally blurt out “Good on you!” It’s almost 6.50am and there’s still no sign of the registration crew when suddenly the revving of a Land Rover breaks the morning silence. A portly couple promptly exit the vehicle and the gentleman drops the rear bumper revealing brown race packs. Wow. This is rugged man. There is a roll call and we all line up to collect our race numbers. The gentleman then begins a rushed race brief. Unfortunately, I was too preoccupied with my race pack and pinning my race number on that I didn’t catch much of the brief other than “Parts of the track are a bit vague.” And then, whilst still in group formation in the middle of Fowler’s Camp (i.e. middle of nowhere), he begins a countdown from 10 that ends with “On you go!”. And just like that, we all head towards the mountains. 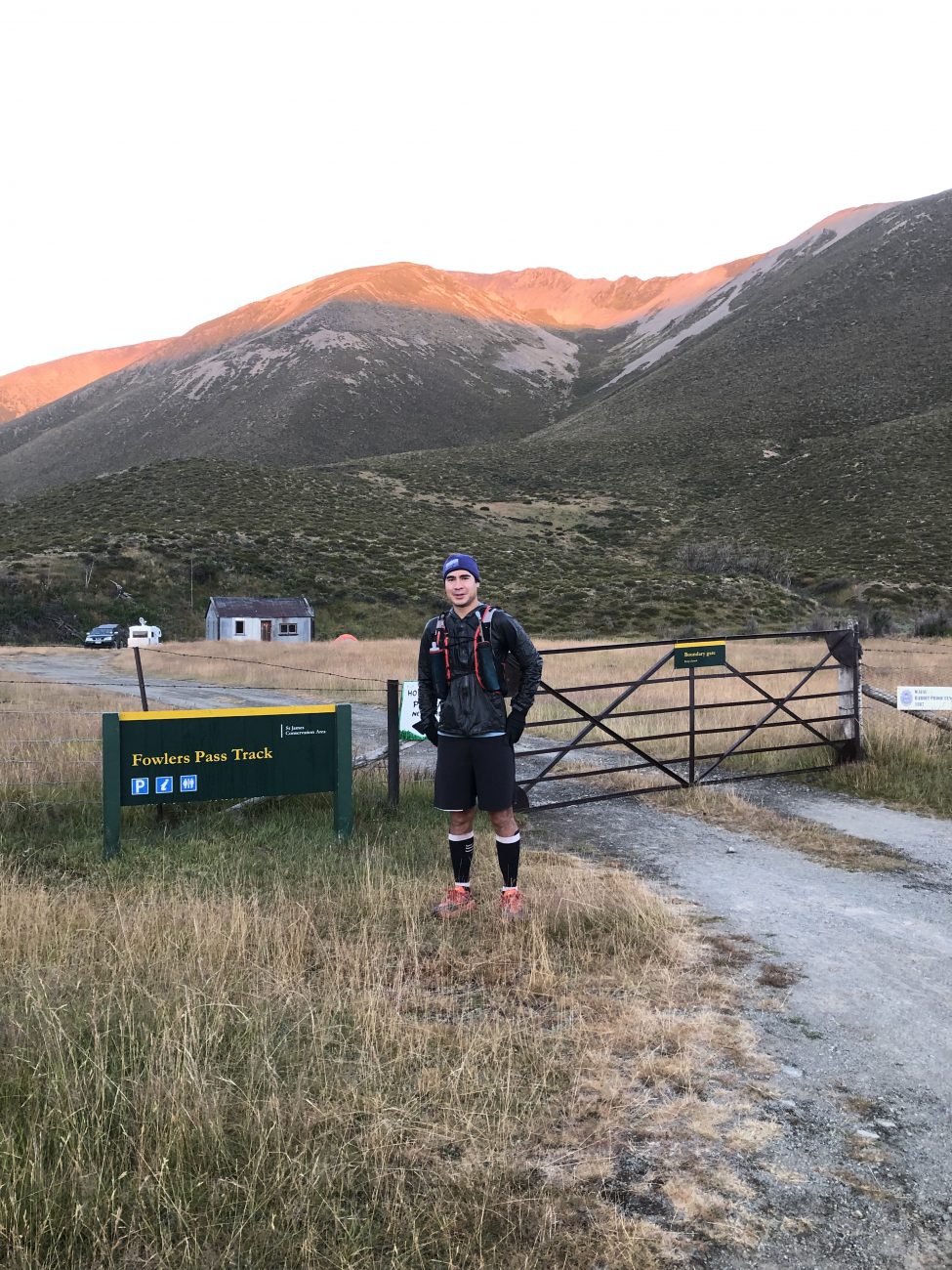 At the start at Fowler’s Camp 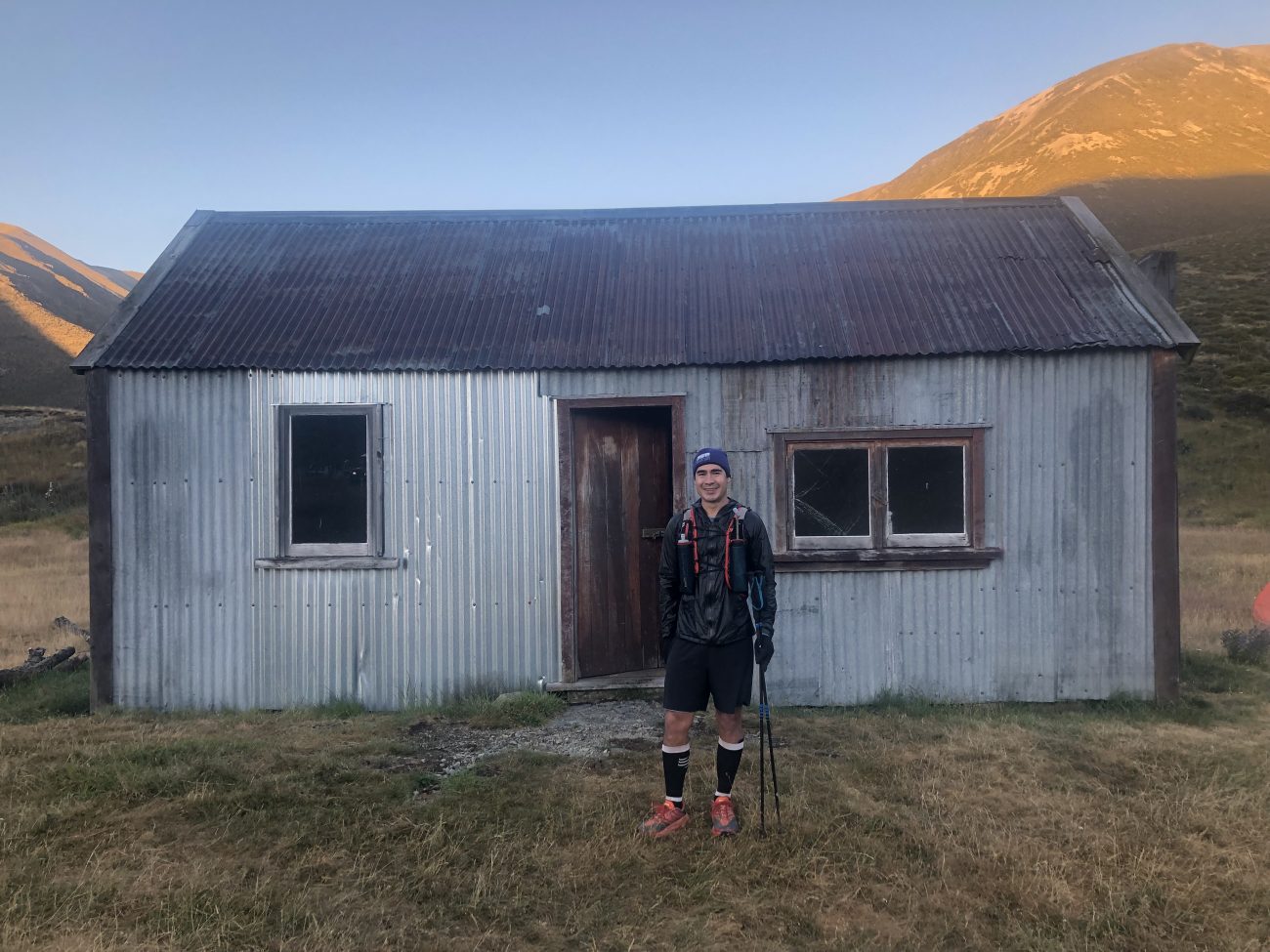 With Tom’s words in my head, I attempt to jog up Fowler’s Pass. However, it’s not long before I realise this approach is not sustainable. My body is still cold and my legs are heavy. Maybe with fresh legs running would be possible. But not one week after Kepler (not to mention my first run since). No way. My legs were simply not having a bar of it. I slow to a more comfortable walking pace and try ease into my run. With forecast temperatures in the high 20s / early 30s, I knew I had to start conservatively or risk being overwhelmed by the afternoon heat. Falling off the pace, I start getting passed by those who can still run when low and behold, the lady in her 70s glides past me! Oh. My. God. This is going to be a long day…

Although heat may actually improve performance in short duration activities (e.g. sprinting and jumping), long duration exercise is significantly impaired in heat. Research (predominantly conducted on marathon runners) has shown that the optimal temperature range for most runners is between 7-15 degrees Celsius. Outside of this range, marathon finish times tend to become slower on average. In fact, most world records and the top 10 marathon performances of all time have been set in temperatures between 10-15 degrees Celsius. So the most important thing you can do is adjust your expectations and your pace according to the environmental conditions. Exercise increases both metabolic heat production (your body is an exercising furnace) and the demand for blood flow/oxygen to your muscles. During exercise in hot conditions, your cardiovascular system has to not only transport blood to your working muscles, but also to your skin for cooling. The heat generated by your muscles can then be transferred to the environment and lost predominantly via evaporation (i.e. sweating). Importantly, as sweat reaches the skin, it must evaporate (i.e. transform from liquid to a vapour) for any heat loss to occur. This explains why exercising in humid conditions is extra challenging as sweat remains on your skin (a humid environment is already saturated with water so the last thing it wants is more of your water vapour). Which leads us to another important concept for runners to appreciate – ‘cardiovascular drift’. Cardiovascular drift is the phenomenon by which your heart rate increases to compensate for the reduced blood flow coming back to your heart (i.e. stroke volume) as more of our blood pools in the periphery to help cool us. As heart rate has been shown to correlate with your rate of perceived exertion (RPE), any ensuing increase in heart rate leads to an increase in perceived effort. RPE is arguably the most important thing that long distance runners are trying to manipulate throughout any run! Throw in some heat induced dehydration (which results in lower blood volume and a further rise in heart rate) and you can see why exercising in the heat is hard work! So, how can one optimise their exercise performance in the heat? The most important intervention one can adopt is to heat acclimatise. This requires training in the heat for at least 60min/day for at least 2 weeks. The risk of heat illness is greatest in early summer when participants are not seasonally heat acclimatised. The risk of heat illness is also greater in those who are currently sick or recovering from a recent viral infection (bear this in mind during Covid times). The other important element is hydration. Start any race euhydrated. Aim to drink 5-7mL/kg of fluid 4hrs before competition. In my experience, a 6-8% carbohydrate 750mL drink with dinner the night before is plenty. Any more and you risk peeing throughout the night. Hydration during an event should be individualised. This is best assessed during training with the most widely accepted method being monitoring body mass changes. Often hydration during an event is limited by fluid availability so if its going to be hot, know where your aid stations are. Although drinking to thirst is appropriate in most settings, if extreme heat or dehydration is expected, it may be beneficial to front foot your drinking requirements (sensibly). Finally, there is a role for cooling strategies in events but this is generally limited to those with die hard support crews. This can be done externally (e.g. cold-water immersion, iced towels/garments) or internally (e.g. ingesting ice or ice slurry beverages). If you’re still struggling in the heat despite all of the above, remember it’s okay to walk (and dare I say it, rest for a while if you need to and then carry on again). 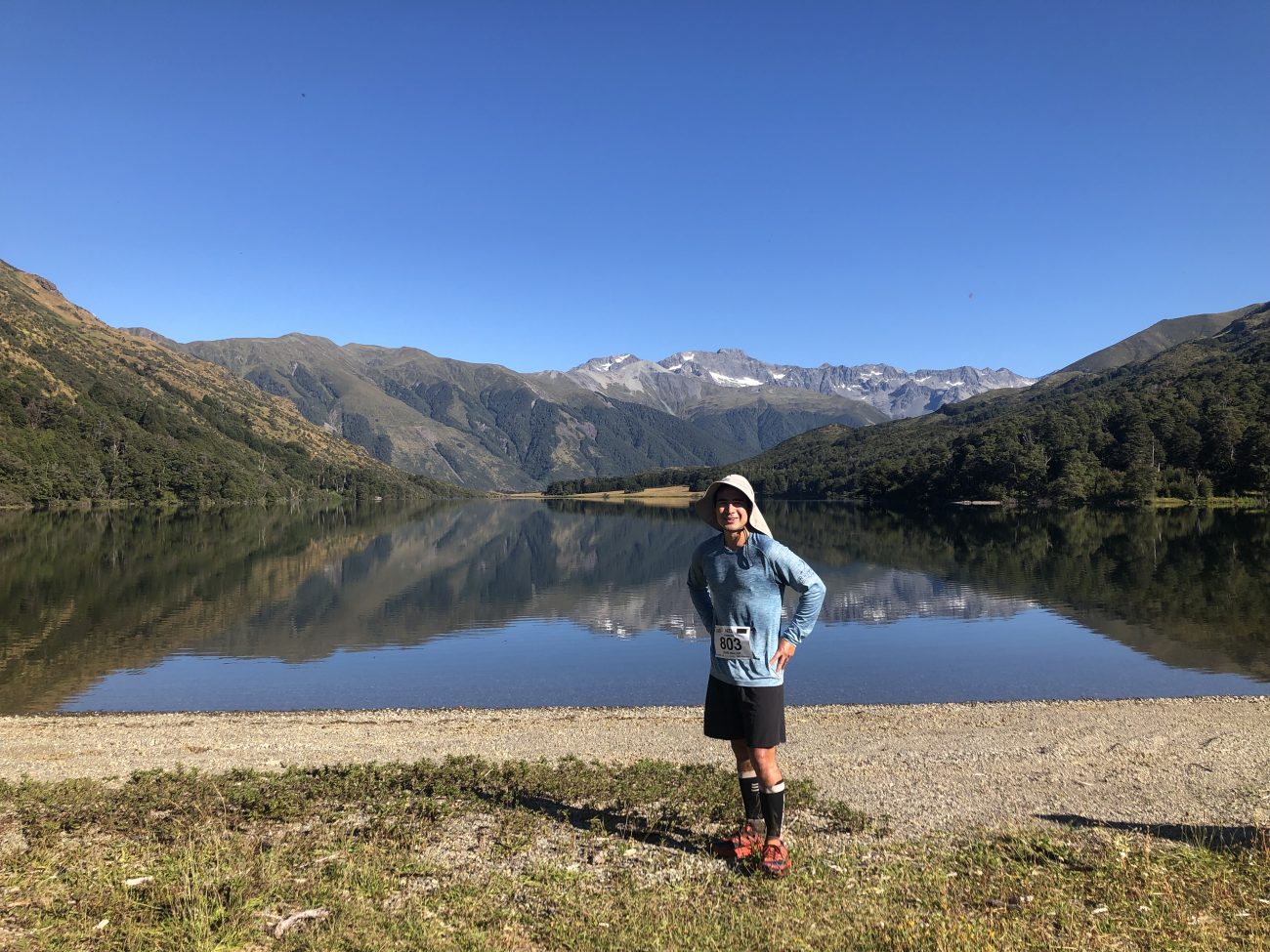 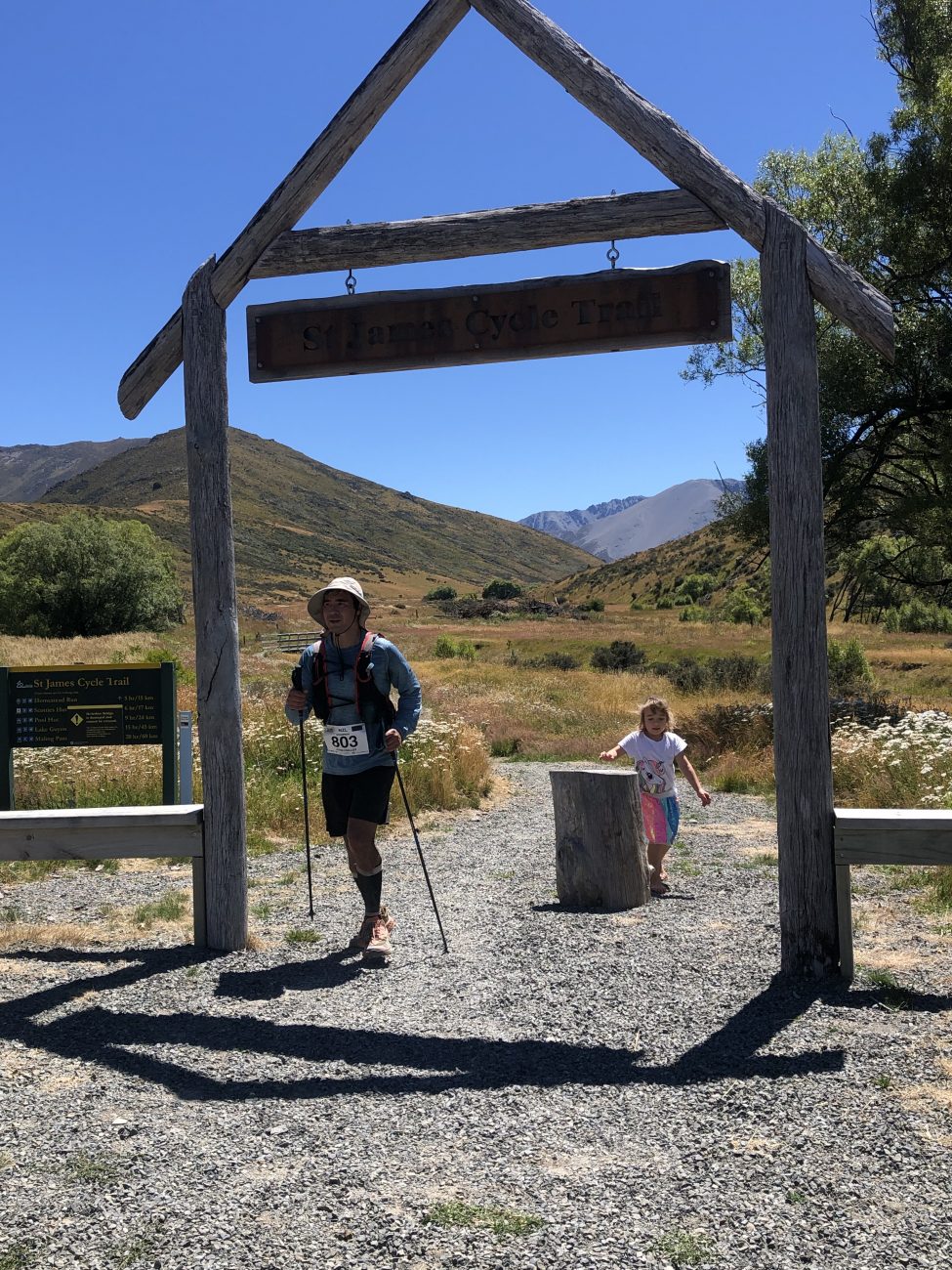 Heading towards the finish line with Millie in support

Adjust your expectations and your pace according to the environmental conditions.